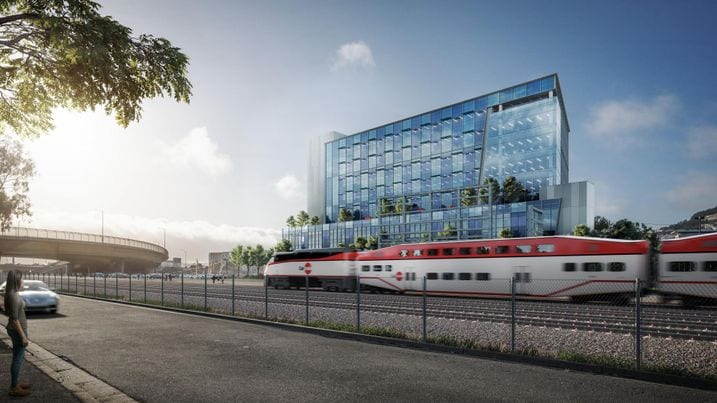 Don’t rec­og­nize the name? Try Cre­ative Sci­ence Prop­er­ties. The San Diego-based com­pa­ny changed its name back in Feb­ru­ary just as it un­veiled a whop­ping $770 mil­lion eq­ui­ty raise to buy and build life sci­ence cam­pus­es at life sci­ence hotspots around the world.

“Mid-tier to large life sci­ence ten­ants” will be the tar­get clien­tele, ac­cord­ing to the com­pa­ny.

These are peo­ple who have been ex­haust­ed by traf­fic and long com­mutes, Mur­phy told End­points News in an email. By con­trast, the new site’s lo­ca­tion right next to a new Cal­train sta­tion ex­pect­ed to open in spring of 2021 promis­es an easy com­mute all the way through San Jose.

It’s al­so a five-minute dri­ve from Oys­ter Point, one of the hottest de­vel­op­ments in the Bay Area, where a slate of play­ers from As­traZeneca to Ab­b­Vie to Sang­amo have set up shop. Genen­tech, the OG res­i­dent of the neigh­bor­ing area, has re­cent­ly out­lined how it can con­tin­ue grow­ing its sprawl­ing cam­pus over the next two decades.

Even though the San Fran­cis­co penin­su­la boasts of the high­est sup­ply of lab space in the US at 21.8 mil­lion square feet, the life sci­ence in­dus­try’s ap­petite for space re­mains in­sa­tiable. A re­cent re­port not­ed that the va­can­cy rate for lab space sits at 7.5% — and pre-leas­es signed be­fore con­struc­tion even be­gins are com­mon.

Oth­er lo­ca­tions on its menu in­clude San Diego, Boston and the Gold­en Tri­an­gle in the Unit­ed King­dom.