As Con­gress bat­tles over gov­ern­ment drug price ne­go­ti­a­tion, new poll finds strong sup­port on both sides of the aisle

More than 80% of Amer­i­cans “strong­ly fa­vor” or “some­what fa­vor” al­low­ing the fed­er­al gov­ern­ment to ne­go­ti­ate with drug com­pa­nies, in­clud­ing 92% of De­moc­rats and 76% of Re­pub­li­cans polled by the Kaiser Fam­i­ly Foun­da­tion late last month and ear­li­er this month.

The poll re­leased Tues­day morn­ing comes as Con­gress re­mains dead­locked on how to find a way to give drug price ne­go­ti­at­ing pow­er to Medicare, as part of an ef­fort to help pay for a larg­er so­cial spend­ing bill from the De­moc­rats. With on­ly a slim ma­jor­i­ty in the Sen­ate, and Pelosi’s planned vote dead­line com­ing up quick­ly at the end of the month, De­moc­rats seem to be re­peat­ing their past fail­ures, find­ing holes in their buck­et of sup­port.

But the KFF poll of about 1,150 US adults, in­clud­ing 474 adults ages 65 and old­er, may bring some so­lace to De­moc­rats who thought their sup­port for drug price ne­go­ti­a­tions would hurt them at the polls.

The poll found that 84% of re­spon­dents found the fol­low­ing state­ment “very con­vinc­ing” or “some­what con­vinc­ing” that “ne­go­ti­a­tion is need­ed be­cause Amer­i­cans pay high­er prices than peo­ple in oth­er coun­tries, many can’t af­ford their pre­scrip­tions, and drug com­pa­ny prof­its are too high.”

The phar­ma­ceu­ti­cal in­dus­try has long main­tained that al­low­ing the fed­er­al gov­ern­ment to ne­go­ti­ate pre­scrip­tion drug prices in any ca­pac­i­ty will be noth­ing short of crip­pling for the en­tire in­dus­try, lead­ing to less R&D and few­er new drugs. The CBO has warned of al­most 60 few­er new drugs over three decades with a ma­jor Medicare drug price ne­go­ti­a­tions bill. And cu­ri­ous­ly, about 1 in 5 peo­ple sur­veyed on both sides of the aisle said they trust the bio­phar­ma in­dus­try on drug prices. 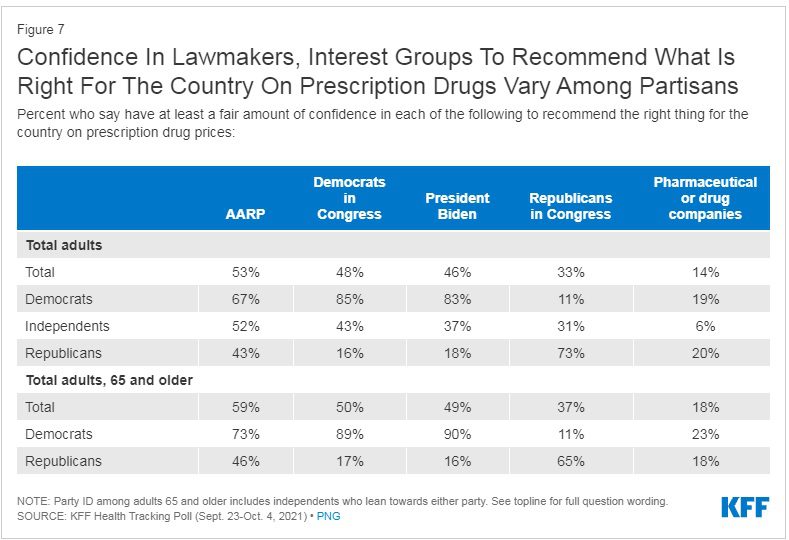 But KFF polling found that on­ly 6% of those sur­veyed said they think “drug com­pa­nies need to charge high prices in or­der to fund the in­no­v­a­tive re­search nec­es­sary for de­vel­op­ing new drugs,” while 93% said “that even if U.S. prices were low­er, drug com­pa­nies would still make enough mon­ey to in­vest in the re­search need­ed to de­vel­op new drugs.” This view is con­sis­tent across par­ti­san­ship and age groups, KFF said.

As Con­gress bat­tles over gov­ern­ment drug price ne­go­ti­a­tion, new poll finds strong sup­port on both sides of the aisle