#AS­CO21: No­var­tis gears up for CAR-T fight with Gilead in fol­lic­u­lar lym­phoma — and safe­ty could de­fine the bat­tle

Since win­ning the first CAR-T ap­proval in the US back in 2017, No­var­tis has been hard at work ex­pand­ing the reach of its block­buster can­cer drug Kym­ri­ah. Gilead’s Yescar­ta beat it to the punch in fol­lic­u­lar lym­phoma (FL) back in March — but now, No­var­tis says it has new piv­otal da­ta that could give its old ri­val a run for its mon­ey.

These new ef­fi­ca­cy re­sults in­clude near­ly twice as many pa­tients as the in­ter­im analy­sis, No­var­tis said. The over­all re­sponse rate al­so saw a small bump, up from the 83% rate record­ed in De­cem­ber. Me­di­an du­ra­tion of re­sponse, pro­gres­sion free sur­vival, and over­all sur­vival were not yet reached, ac­cord­ing to No­var­tis.

Grade 1 or 2 CRS oc­curred in 49% of pa­tients in ELARA, with 9% of pa­tients ex­pe­ri­enc­ing Grade 1 or 2 neu­ro­log­i­cal events. One pa­tient ex­pe­ri­enced Grade 4 neu­ro­log­i­cal events, but re­cov­ered. Three par­tic­i­pants died from pro­gres­sive dis­ease, though none of the deaths were treat­ment-re­lat­ed, ac­cord­ing to the Swiss phar­ma. 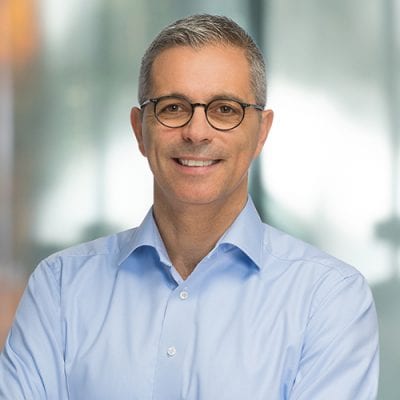 No­var­tis plans on run­ning the new da­ta to reg­u­la­tors “as quick­ly as pos­si­ble,” ac­cord­ing to Ste­fan Hen­driks, the glob­al head of No­var­tis On­col­o­gy’s cell and gene di­vi­sion. He con­firmed in an email to End­points News that a sub­mis­sion for the new in­di­ca­tion will come some­time this year.

FL is the sec­ond most com­mon form of non-Hodgkin lym­phoma, with a five-year sur­vival rate of on­ly 20% for pa­tients in the third line and lat­er. Pa­tients with FL have ma­lig­nant tu­mors that grow slow­ly and can be­come more ag­gres­sive over time, and ef­fi­ca­cy of avail­able treat­ments drops off rapid­ly in lat­er lines. Pa­tients in ELARA had a me­di­an of four pri­or treat­ments, though some had tak­en as many as 13.

Yescar­ta won ap­proval as a third-line ther­a­py back in March, be­com­ing the first CAR-T ap­proved for re­lapsed/re­frac­to­ry FL. The OK was based on re­sults from the ZU­MA-5 tri­al, in which 91% of pa­tients saw a re­sponse, 60% of whom achieved a com­plete re­mis­sion, ac­cord­ing to Gilead. Me­di­an du­ra­tion of re­sponse had not been reached.

While Kym­ri­ah beat Yescar­ta out the gate back in 2017, Yescar­ta has the up­per hand in sales, at least in Q1 of this year. The Gilead drug pulled in $160 mil­lion last quar­ter, while Kym­ri­ah made No­var­tis $151 mil­lion.

#AS­CO21: No­var­tis gears up for CAR-T fight with Gilead in fol­lic­u­lar lym­phoma — and safe­ty could de­fine the bat­tle