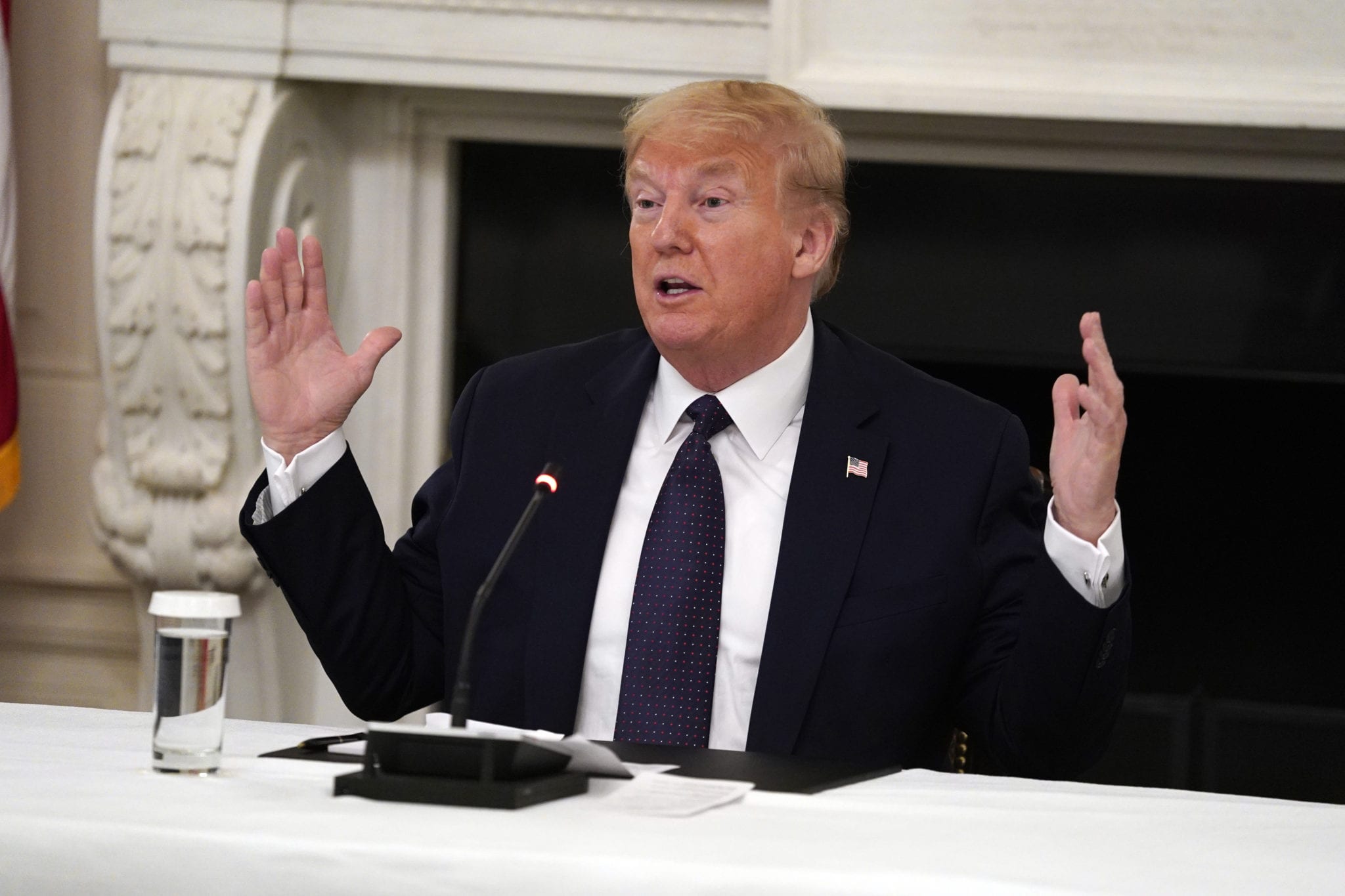 President Donald Trump speaks during a meeting with restaurant industry executives about the coronavirus response, in the State Dining Room of the White House, Monday, May 18, 2020, in Washington. (Evan Vucci, AP Images)
May 19, 2020 07:27 AM EDTUpdated 07:40 AM
Coronavirus

Covid-19 roundup: Trump says he's been tak­ing hy­drox­y­chloro­quine for days; Mod­er­na rais­es $1.3B on the heels of ground­break­ing da­ta

A cou­ple of months af­ter he start­ed tout­ing hy­drox­y­chloro­quine as a po­ten­tial treat­ment for Covid-19 on thin ev­i­dence, Pres­i­dent Don­ald Trump re­vealed that he’s been tak­ing the an­ti-malar­ia drug for a lit­tle over a week.

Trump’s pub­lic pro­mo­tion of the drug — as well as his aides’ be­hind-the-scenes work to push for wider use — has been the cen­ter of a whistle­blow­er com­plaint in which Rick Bright, the for­mer chief of BAR­DA, al­leged he was oust­ed for re­sist­ing the pres­sure to en­dorse the un­proven ther­a­py and chloro­quine, a sim­i­lar com­pound.

The FDA pro­vid­ed the emer­gency use au­tho­riza­tion that paved the way for wider use in late March but lim­it­ed the man­date to the hos­pi­tal set­ting. With­in a month, it al­so is­sued a safe­ty warn­ing with­in a month, ad­vis­ing physi­cians to close­ly screen and mon­i­tor pa­tients to help mit­i­gate the risks of heart rhythm prob­lems.

At a press con­fer­ence on Mon­day, Trump at­tacked Bright, say­ing “there’s a lot of bad things com­ing out about him” and point­ing out that he had signed the ap­pli­ca­tion for the EUA, be­fore piv­ot­ing to prais­ing hy­droxy.

The pres­i­dent said he’s tak­ing hy­drox­y­chloro­quine as a pro­phy­lac­tic, a use that’s be­ing in­ves­ti­gat­ed among front­line health­care work­ers and oth­ers at high risk of get­ting ex­posed to the virus.

When pressed, he cit­ed “a lot of pos­i­tive calls about it” as the source of his con­fi­dence that the drug would have a pre­ven­ta­tive ef­fect, even though he main­tains he’s not been ex­posed. Call­ing the neg­a­tive VA study a “very un­sci­en­tif­ic re­port,” he re­it­er­at­ed the pre­vi­ous line: “What have you got to lose?” — Am­ber Tong

The fron­trun­ner sta­tus in the race to de­vel­op a vac­cine against Covid-19 is prov­ing lu­cra­tive for Mod­er­na, which has raised $1.34 bil­lion in a pub­lic of­fer­ing.

The Cam­bridge, MA-based biotech pro­posed to sell and then quick­ly priced 17,600,000 shares at $76 a pop. While that would have marked a 15% pre­mi­um on the stock price Mon­day morn­ing, the re­lease of pre­lim­i­nary re­sults from the on­go­ing Phase I tri­al of its mR­NA SARS-CoV-2 vac­cine boost­ed it well be­yond that in­to the $80 ter­ri­to­ry.

It’s not just in­vestors who are bet­ting on Mod­er­na. BAR­DA has in­ject­ed $483 mil­lion in­to the clin­i­cal and man­u­fac­tur­ing ops, in the hopes of get­ting the pro­duc­tion ca­pac­i­ty in place for a large-scale roll­out.  — Am­ber Tong

But Gilead won’t be of­fer­ing the drug — the on­ly treat­ment to have shown clin­i­cal ben­e­fit in a place­bo-con­trolled study and one that’s been au­tho­rized for emer­gency use — for free for­ev­er. SVB Leerink an­a­lyst Ge­of­frey Porges, who host­ed a vir­tu­al fire­side chat with Gilead CFO An­drew Dick­in­son and SVP of HIV & emerg­ing in­fec­tions Di­ana Brainard, had this to re­port:

Covid-19 roundup: Trump says he's been tak­ing hy­drox­y­chloro­quine for days; Mod­er­na rais­es $1.3B on the heels of ground­break­ing da­ta