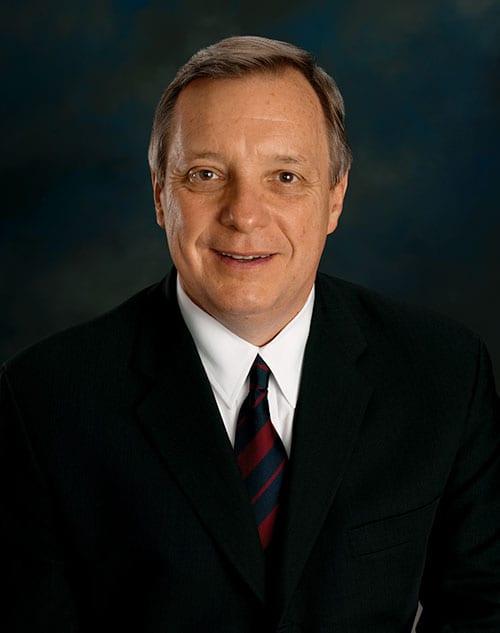 Sen­a­tor Richard Durbin (D-IL) took to the Sen­ate floor on Wednes­day to push for a vote on a bi­par­ti­san bill that would re­quire phar­ma­ceu­ti­cal com­pa­nies to list the prices of their pre­scrip­tion drugs in di­rect-to-con­sumer (DTC) ad­ver­tise­ments.

Ac­cord­ing to Durbin, the av­er­age Amer­i­can sees nine DTC drug ads each day and the phar­ma­ceu­ti­cal in­dus­try spends more than $6 bil­lion per year on DTC ads.

Durbin and Sen­a­tor Chuck Grass­ley (R-IA) passed a sim­i­lar ver­sion of this bill unan­i­mous­ly in the Sen­ate in Au­gust 2018, but it was re­moved in an ap­pro­pri­a­tions con­fer­ence with the House of Rep­re­sen­ta­tives.
Now, how­ev­er, Grass­ley notes that the De­moc­rats con­trol the House and if the Sen­ate acts on the bill, which is al­so co-spon­sored by Sen­a­tors An­gus King (I-ME), and Lamar Alexan­der (R-TN), it could be­come law.

The lat­est push for such dis­clo­sures comes as US Dis­trict Court Judge Amit Mehta in Ju­ly ruled that the US De­part­ment of Health and Hu­man Ser­vices (HHS) lacks the au­thor­i­ty to re­quire drug­mak­ers to post list prices in phar­ma­ceu­ti­cal DTC tele­vi­sion ad­ver­tise­ments.

Pre­vi­ous­ly in June, Am­gen, Mer­ck, Eli Lil­ly and the As­so­ci­a­tion of Na­tion­al Ad­ver­tis­ers sued HHS over its pend­ing rule that would have es­tab­lished such dis­clo­sures, claim­ing that the list prices are not what pa­tients pay and that the agency does not have the au­thor­i­ty for such a rule­mak­ing.

Mean­while, a re­search let­ter in JA­MA from Sep­tem­ber, shows how states are con­tin­u­ing to push for fur­ther drug price trans­paren­cy but with lit­tle suc­cess. Of 166 drug pric­ing laws iden­ti­fied in the study, 35 laws passed in 22 states and in­clud­ed a trans­paren­cy com­po­nent, but on­ly sev­en laws passed in six states were deemed in­for­ma­tive.

“De­spite many re­cent state laws about price trans­paren­cy, we found that most of them were in­suf­fi­cient to re­veal true trans­ac­tion prices, and no state passed leg­is­la­tion that pro­vid­ed ef­fec­tive trans­paren­cy across the en­tire sup­ply chain. To en­sure drug price leg­is­la­tion is use­ful, pol­i­cy mak­ers should re­quire that re­al price in­for­ma­tion, in­clud­ing dis­counts and re­bates, is re­port­ed by all sup­ply chain par­tic­i­pants,” the au­thors from the Uni­ver­si­ty of South­ern Cal­i­for­nia wrote.