An un­con­ven­tion­al pair­ing of a gene ther­a­py and an oral drug that promis­es to at­tack re­cur­rent or pro­gres­sive glioblas­toma with con­trolled re­lease of IL-12 has turned up more promis­ing — if ear­ly — over­all sur­vival da­ta. On top of boost­ing its case as a monother­a­py, the da­ta can al­so bode well for a com­bi­na­tion with Re­gen­eron’s PD-1 in­hibitor, Lib­tayo.

Both the treat­ment and its de­vel­op­er, Zio­pharm On­col­o­gy, have come a long way. The stock price peaked in 2015 but cratered in 2016 fol­low­ing a pa­tient death in a Phase I. 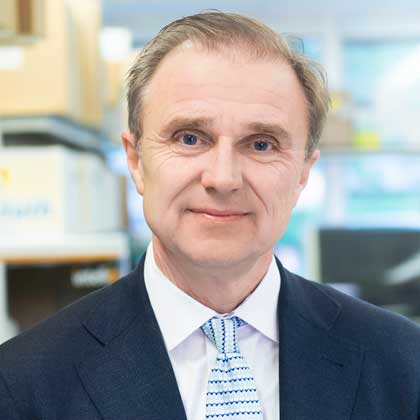 “We know from con­ver­sa­tions with reg­u­la­tors that me­di­an over­all sur­vival (mOS) is used as a bench­mark to help de­ter­mine the po­ten­tial ap­proval of new treat­ments for re­cur­rent (rGBM),” CEO Lau­rence Coop­er told End­points News. “There­fore, this sur­vival end­point is what we are us­ing to gauge suc­cess of our Con­trolled IL-12 can­di­date.”

By in­ject­ing a vec­tor that car­ries the gene for IL-12 — a pow­er­ful in­ter­leukin that’s re­ferred to as a “mas­ter cy­tokine” for its abil­i­ty to or­ches­trate an im­mune re­sponse — Zio­pharm’s goal is to stir up T cell re­sponse against hard-to-treat can­cer. But to en­sure that the im­mune sys­tem doesn’t get out of con­trol, the biotech has in­vent­ed an oral ac­ti­va­tor lig­and such that physi­cians can tune how much IL-12 to re­lease, by re­mote­ly in­struct­ing the pa­tients to ad­just the dose.

Cor­ti­cos­teroids pro­vide an ex­tra lev­el of pro­tec­tion, al­though it could al­so damp­en the im­mune ac­tiv­i­ty — which Coop­er said ex­plains why the pa­tients on the low­est dose of steroids seem to have the best re­sponse to their ther­a­py.

The lat­est up­date across three tri­als al­so brought the tal­ly of par­tial re­spons­es to five.