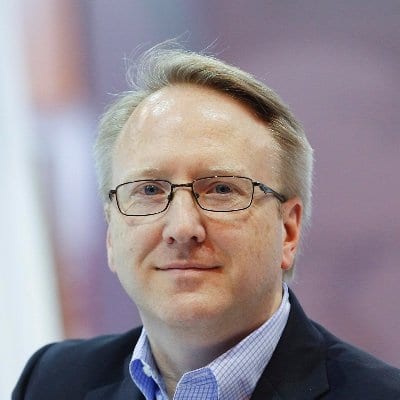 Armed with the Phase Ib da­ta, J&J is tak­ing the com­bo straight to Phase III , where it’s go­ing head to head with As­traZeneca’s dom­i­nant TKI, Tagris­so, for pre­vi­ous­ly un­treat­ed pa­tients.

“So while it’s 20 pa­tients and it’s quite ear­ly still, you can’t get bet­ter than a 100% re­sponse rate. You just can’t,” Mark Wild­gust, the VP of glob­al med­ical af­fairs, on­col­o­gy at J&J’s Janssen sub­sidiary, told End­points News. “We know that os­imer­tinib it­self gets you in the mid-80% range for re­sponse rate, so it’s hard to say that ami­van­tam­ab or laz­er­tinib is bet­ter, I would nev­er say that, but cer­tain­ly as I was say­ing you can’t get bet­ter than 100%.”

At the same time, Wild­gust not­ed that laz­er­tinib stands out among TKIs with low rates of rash and di­ar­rhea as well as low car­diac tox­i­c­i­ty — a key rea­son J&J chose to li­cense the drug from Ko­rea’s Yuhan for $50 mil­lion up­front al­most two years ago. In se­lect­ing a drug for the com­bo, over­lap­ping tox­i­c­i­ty was a key con­cern.

“We re­al­ly want­ed to find a third gen­er­a­tion EGFR TKI that has a re­al­ly good safe­ty pro­file,” he said, “and we found that with laz­er­tinib.”

The front­line use of the com­bo reg­i­men, though, is on­ly one of three paths where the Janssen team is steer­ing ami­van­tam­ab.

In the Phase Ib CHRYSALIS study pre­sent­ed at ES­MO, fol­low­ing the dose es­ca­la­tion por­tion in­ves­ti­ga­tors al­so en­rolled a group of 45 pa­tients who have re­lapsed af­ter tak­ing Tagris­so. There, the ami­van­tam­ab/laz­er­tinib com­bo re­sults in a 36% ORR, with one com­plete re­sponse and 15 par­tial re­spons­es.

“To­day in fact there are no ap­proved agents post a third gen­er­a­tion EGFR TKI,” Wild­gust said. “So to­day many pa­tients are get­ting os­imer­tinib, and re­al­ly the next ther­a­py for those pa­tients af­ter­wards is chemother­a­py.”

The next step here will be a Phase II tri­al test­ing the com­bi­na­tion in pa­tients who have pro­gressed af­ter re­ceiv­ing both Tagris­so and chemother­a­py.