Gear­ing up new part­ner­ships, Boehringer gets an op­tion to buy a new play­er in on­colyt­ic virus­es in $230M deal

Boehringer In­gel­heim is ac­tive­ly join­ing the hunt for the next big on­colyt­ic virus pro­gram in the hot and hap­pen­ing can­cer field. 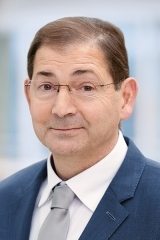 Dr. Michel Pairet, Mem­ber of the Board of Man­ag­ing Di­rec­tors

Af­ter back­ing a small start­up round for Vi­raTher­a­peu­tics a lit­tle more than a year ago, the phar­ma com­pa­ny has come back with a $230 mil­lion pack­age deal to part­ner on their work — grab­bing an op­tion in the process to buy the com­pa­ny. And the phar­ma gi­ant says the part­ner­ship is a sign of more deals to come as it gears up new pacts.

The com­pa­nies didn’t spell out the terms, but dis­cov­ery-stage col­lab­o­ra­tions like this are usu­al­ly heav­i­ly back end­ed.

Am­gen was the first to make it to the mar­ket with a pi­o­neer­ing on­colyt­ic virus called Im­ly­g­ic (T-Vec), which it bagged in a bil­lion-dol­lar deal to ac­quire BioVex. That drug has had a slow launch since its ap­proval, though, and a grow­ing line­up of biotech com­pa­nies have set out to beat it.

Im­ly­g­ic is in­ject­ed di­rect­ly in­to tu­mors. Like PsiOxus, Vi­raTher­a­peu­tics be­lieves that an on­colyt­ic virus that is de­liv­ered sys­tem­i­cal­ly can have a much bet­ter shot at get­ting in­to can­cer cells, where they can mul­ti­ple and then de­stroy their tar­get. Von Laer al­so says their drug can spur an im­mune sys­tem at­tack on can­cer, and the com­pa­ny is look­ing at at­tach­ing ther­a­peu­tic genes and anti­gens that can dri­ve a bet­ter out­come.

Dr. Michel Pairet, a mem­ber of Boehringer In­gel­heim’s Board of Man­ag­ing Di­rec­tors, had this to say:

Gear­ing up new part­ner­ships, Boehringer gets an op­tion to buy a new play­er in on­colyt­ic virus­es in $230M deal