To­day, with just one day left in the Trump ad­min­is­tra­tion, the lat­est dis­pute be­tween HHS and its sub­agency spilled in­to the pub­lic. 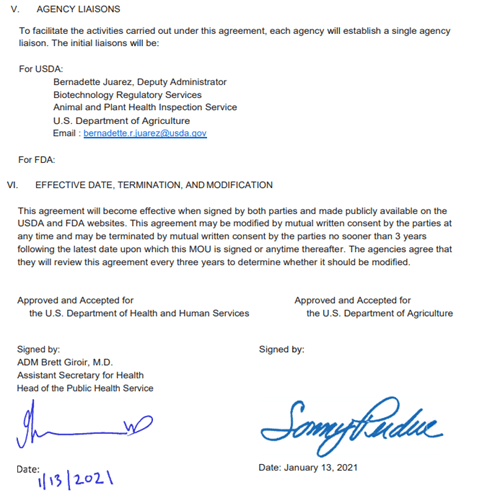 In a stun­ning move, Hahn tweet­ed that FDA would not abide by the MoU, a rare pub­lic air­ing of a dis­pute be­tween top ad­min­is­tra­tion of­fi­cials that fol­lows height­ened po­lit­i­cal pres­sure on the agency to quicky au­tho­rize ther­a­peu­tics and vac­cines for COVID-19. That pres­sure has led to dis­cus­sion among health ex­perts as to whether FDA should have greater in­de­pen­dence from po­lit­i­cal in­flu­ence, some­thing Hahn him­self has said should be on the ta­ble. 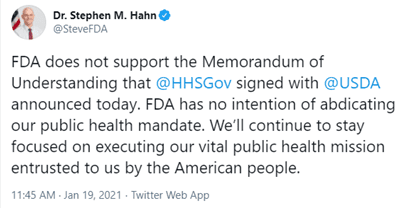 In a state­ment to Fo­cus, an HHS spokesper­son said the MoU was pushed through at the di­rec­tion of the White House. “To­day’s MOU an­nounce­ment in­volv­ing HHS and US­DA re­gard­ing agri­cul­tur­al an­i­mal biotech­nol­o­gy is the re­sult of a for­mal pol­i­cy process co­or­di­nat­ed by the White House. Sec­re­tary Azar was and re­mains sup­port­ive of Com­mis­sion­er Hahn’s and FDA’s po­si­tion on the MOU, but at the di­rec­tion of the White House, the de­ci­sion was made to ex­e­cute the MOU,” the spokesper­son said.

Aaron Kessel­heim, di­rec­tor of Har­vard Med­ical School and Brigham & Women’s Hos­pi­tal’s Pro­gram on Reg­u­la­tion, Ther­a­peu­tics and Law, told Fo­cus that the MoU fits in with the oth­er “last-minute rad­i­cal pol­i­cy changes” be­ing pur­sued by HHS. “These changes are uni­form­ly bad in that they di­min­ish the FDA’s vi­tal role in pro­tect­ing the pub­lic health,” he said, adding that he hopes that “the in­com­ing ad­min­is­tra­tion of Pres­i­dent Biden re­vers­es as many of them as he can as quick­ly as he can.”