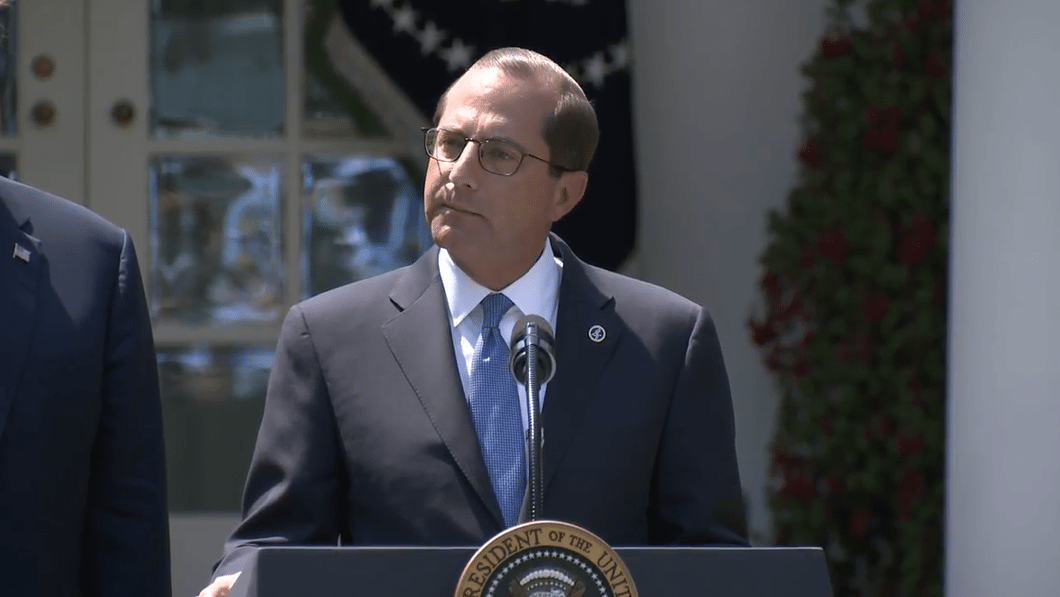 Cel­gene $CELG wasn’t sin­gled out by name in a speech by HHS Sec­re­tary Alex Azar Mon­day, but the big biotech got cast in the role of main vil­lain in his out­line of what ails Medicare — and how that should be fixed.

Be­cause it’s a can­cer drug, Azar adds, its one of six pro­tect­ed class­es of ther­a­pies that Medicare is re­quired to cov­er. And as a re­sult, the fed­er­al gov­ern­ment is pay­ing an av­er­age 6% dis­count on these drugs, while pri­vate pay­ers are able to gain dis­counts of 20% to 30%.

Azar went to some length on Mon­day to ex­pand on the drug price plan that he and Pres­i­dent Don­ald Trump pre­sent­ed on Fri­day — amid con­sid­er­able re­lief by Big Phar­ma play­ers and their in­vestors who quick­ly shrugged it off as large­ly a non-event.

In the speech to­day, Azar at­tacked two of the big weapons that have been sug­gest­ed for rein­ing in prices, but al­so said they would like­ly re­main on the ta­ble un­less the in­dus­try played ball in ne­go­ti­at­ing bet­ter terms for drugs like Revlim­id. And he broached the is­sue of merg­ing Part B drugs in­to Part D, so they could use bet­ter ne­go­ti­at­ing pow­ers to bring down their cost.

Nev­er­the­less, he held those mea­sures out as a threat the in­dus­try has to deal with now by of­fer­ing bet­ter prices on drugs used by the fed­er­al pro­gram. From his pre­pared re­marks:

We don’t be­lieve ei­ther of these pro­pos­als would put Amer­i­can pa­tients first. They would move us to­ward the kind of so­cial­ized med­i­cine sys­tems that have such a no­to­ri­ous rep­u­ta­tion for poor qual­i­ty and ac­cess. This stacks right up there with the false promis­es of Oba­macare: that if you like your plan, you can keep it, and if you like your doc­tor, you can keep see­ing him.

But I don’t ex­pect these ideas to go away, no mat­ter how un­like­ly they are to work. If the phar­ma­ceu­ti­cal in­dus­try wants this idea off the ta­ble en­tire­ly, the on­ly way is to come to the ta­ble with us, to en­gage in mean­ing­ful ne­go­ti­a­tion with Medicare Part D plans, and to stop the price hikes.

Cana­da sim­ply doesn’t have enough drugs to sell them to us for less mon­ey, and drug com­pa­nies won’t sell Cana­da or Eu­rope more just to have them im­port­ed here.

And un­safe drugs from un­re­li­able man­u­fac­tur­ers could be used to plug the gap.

HHS al­so plans to use sham­ing tac­tics against any drug mak­ers that refuse to make sam­ples avail­able for gener­ic man­u­fac­tur­ers to use for their de­vel­op­ment work, call­ing them out on any abus­es they find. In a sense, Azar — a for­mer top ex­ec at Eli Lil­ly — is muscling the en­tire in­dus­try to back off some fa­vorite talk­ing points he once used him­self and get re­al with their pric­ing strate­gies.

For too long, there’s been a lot of talk on drug prices and no ac­tion. Drug com­pa­nies have in­sist­ed we can have new cures or af­ford­able prices, but not both.

I’m not in­ter­est­ed in hear­ing those talk­ing points any­more, and nei­ther is the Pres­i­dent.

Im­age: HHS Sec­re­tary Alex Azar at the May 11 speech. WHITE HOUSE via YOUTUBE