As scruti­ny in­to in­sulin pric­ing in the Unit­ed States in­ten­si­fies, Lil­ly is lay­ing out the ground­work for its de­fense ahead of a third Con­gres­sion­al hear­ing on soar­ing drug prices next month in which the mid­dle­men — phar­ma­cy ben­e­fit man­agers — will do their ut­most to ex­on­er­ate them­selves in the role they play in pre­scrip­tion drug pric­ing.

On Sun­day, the US drug­mak­er — one of the trio of big glob­al in­sulin mak­ers: Sanofi and No­vo Nordisk that serves the Unit­ed States — is­sued a re­port break­ing down what it gets paid, on av­er­age, ver­sus the list price of its in­sulin treat­ments. 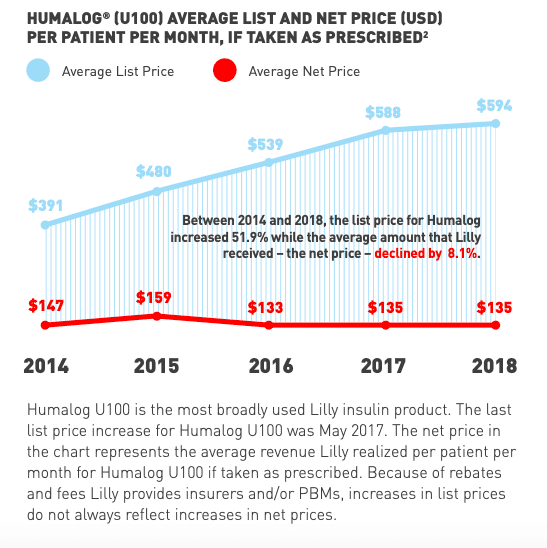 Lil­ly’s dis­clo­sure can be viewed as a step to­ward trans­paren­cy, as much as it is a dig at the role of PBMs and oth­er mid­dle­men in in­sulin pric­ing — giv­en it has be­come in­creas­ing­ly clear that the big­ger re­bates are not trick­ling down to the pa­tient. The com­pli­cat­ed drug sup­ply chain has con­found­ed law­mak­ers and re­searchers alike. In a re­cent analy­sis con­duct­ed by an ADA work­ing group — which held dis­cus­sions with more than 20 stake­hold­ers in the in­sulin sup­ply chain — it is un­clear pre­cise­ly how the dol­lars flow and how much each in­ter­me­di­ary prof­its.

Lil­ly’s re­port comes af­ter the drug­mak­er pledged to launch a half-price gener­ic of Hu­ma­log — which gen­er­at­ed near­ly $3 bil­lion in 2018 sales — ear­li­er this month. Ex­press Scripts $ES­RX — a large PBM— came out in sup­port of the move. “We of­ten have asked drug com­pa­nies to sim­ply low­er their prices. In­stead, drug com­pa­nies have elect­ed to in­crease prices and in­crease re­bates. This is the op­tion drug mak­ers have cho­sen for them­selves and for the mar­ket­place,” the com­pa­ny ear­li­er said in a state­ment. “We are in dis­cus­sions with Eli Lil­ly about Hu­ma­log au­tho­rized al­ter­na­tive, and if the net cost is low­est for plans, we will add it to our Flex For­mu­la­ry.”