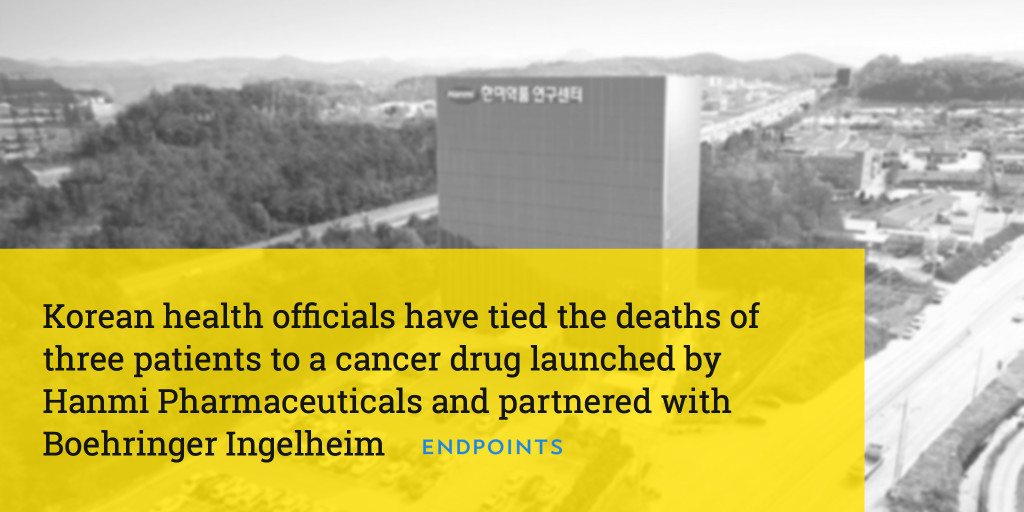 Not long ago, though, Boehringer — which has paid Han­mi $65 mil­lion of a $730 mil­lion deal — had been ea­ger to see if it could quick­ly put the drug through a mid-stage study and then seek a fast ap­proval.

Back in May, two months af­ter the sec­ond pa­tient death re­port­ed by Ko­re­an of­fi­cials, Boehringer put out a re­lease tout­ing the Ko­re­an ap­proval of the drug, stat­ing:

“This first ap­proval of ol­mu­tinib is an ex­cit­ing mile­stone for the com­pound and we are work­ing dili­gent­ly to make this nov­el treat­ment op­tion glob­al­ly avail­able to pa­tients and physi­cians as quick­ly as pos­si­ble,” said Boehringer on­col­o­gy chief Jörg Barth, in a state­ment.

Han­mi, mean­while, is now un­der in­ves­ti­ga­tion to see if there was any in­sid­er trad­ing of com­pa­ny stock around the re­port on ad­verse events, which came out just hours af­ter the com­pa­ny com­plet­ed a tie-up with Genen­tech. In the mean­time, Ko­re­an of­fi­cials have re­port­ed­ly de­cid­ed to keep the drug on the mar­ket un­der the con­di­tion­al ap­proval that was hand­ed out ear­li­er in the year. Even though there was one re­port­ed pa­tient death at the time, they said, they had no di­rect link to the drug. Pa­tients would have to be in­formed of the risks, they said, be­fore they were giv­en the drug.

Look­ing to make a big move in­to brand­ed drugs, Han­mi has been rack­ing up a se­ries of part­ner­ships with mar­quee drug de­vel­op­ers. Just yes­ter­day Genen­tech signed on to part­ner on an ear­ly-stage can­cer drug. Last fall, Sanofi paid €400 mil­lion up­front to part­ner with Han­mi on a port­fo­lio of di­a­betes drugs. Be­fore that, there was a pact with Eli Lil­ly worth up to $690 mil­lion on an au­toim­mune drug for a va­ri­ety of dis­eases. And J&J has al­so part­nered with Han­mi, which has been beef­ing up its R&D arm in a con­cert­ed ef­fort to build a port­fo­lio of brand­ed ther­a­pies.