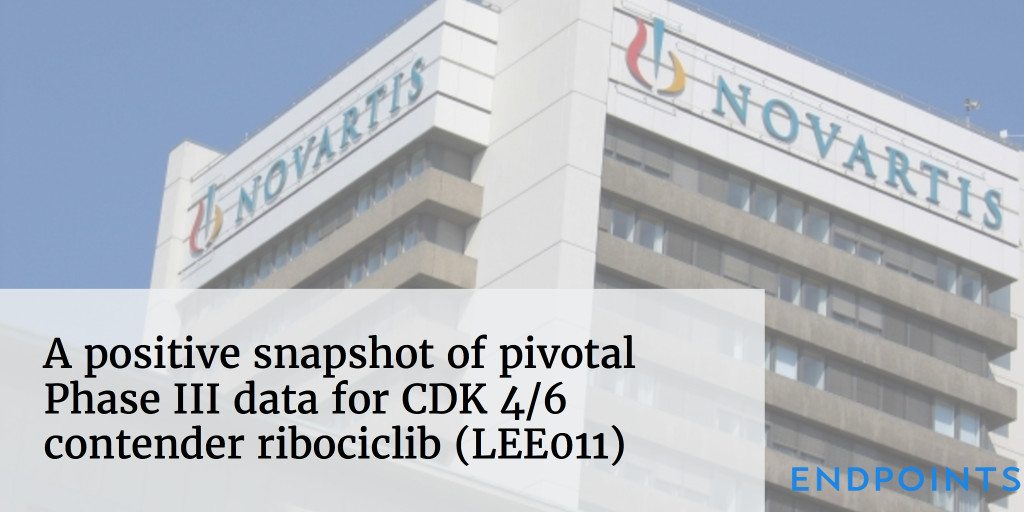 A me­di­an pro­gres­sion-free sur­vival ben­e­fit could not be es­tab­lished, but the trend is clear. Their study, pub­lished in the New Eng­land Jour­nal of Med­i­cine, con­clud­ed:

Pfiz­er was able to land an ac­cel­er­at­ed ap­proval for pal­bo­ci­clib (sold as Ibrance) in ear­ly 2015 with ear­ly da­ta demon­strat­ing a 20.2-month PFS rate for Ibrance plus letro­zole com­pared to about 10.2 months for par­tic­i­pants re­ceiv­ing on­ly letro­zole.

No­var­tis — which end­ed their study ear­ly on pos­i­tive da­ta — has sev­er­al things go­ing in its fa­vor now. The FDA has ex­pe­ri­ence with CDK 4/6 and al­so grant­ed ri­bo­ci­clib a break­through drug des­ig­na­tion, flag­ging the dis­tinct pos­si­bil­i­ty of a fast OK. Bar­ring a nasty sur­prise, that would put No­var­tis in line to chal­lenge Pfiz­er for a block­buster pop­u­la­tion. And it would like­ly get them out in­to a mar­ket they know well ahead of Eli Lil­ly, which is bull­ish about its chances with the ri­val CDK 4/6 drug abe­maci­clib.

“The MONALEESA-2 re­sults show the com­bi­na­tion of LEE011 plus letro­zole rep­re­sents a sig­nif­i­cant step for­ward in the man­age­ment of HR+ metasta­t­ic breast can­cer and, if ap­proved, would be a ma­jor ad­di­tion to the treat­ment op­tions these pa­tients have. Women liv­ing with metasta­t­ic breast can­cer will be on treat­ment for the rest of their lives, so it is crit­i­cal to find treat­ment op­tions that ef­fec­tive­ly de­lay pro­gres­sion.”