With sev­en adal­i­mum­ab biosim­i­lars lined up for a stag­gered launch next year, com­pa­nies are do­ing what they can now to dif­fer­en­ti­ate them­selves from the pack vy­ing for one of the world’s best-sell­ing drugs of all time.

But Pfiz­er’s case for in­ter­change­abil­i­ty (a de­ci­sion from FDA is ex­pect­ed in Q4) is a lit­tle bit dif­fer­ent be­cause its ver­sion of Ab­b­Vie’s megablock­buster Hu­mi­ra, known as Abri­la­da (adal­i­mum­ab-afzb), ini­tial­ly won FDA ap­proval in Nov. 2019, where­as Alvotech has yet to win an ap­proval.

The ap­pli­ca­tion for Pfiz­er was sup­port­ed by pos­i­tive topline da­ta from a study eval­u­at­ing mul­ti­ple switch­es be­tween Abri­la­da and Hu­mi­ra, both of which were ad­min­is­tered with methotrex­ate in adult pa­tients with mod­er­ate to se­vere rheuma­toid arthri­tis. The study met its pri­ma­ry goal, Pfiz­er said, by demon­strat­ing PK equiv­a­lence in pa­tients who switched mul­ti­ple times be­tween treat­ment with the two med­i­cines. The com­pa­ny an­tic­i­pates sub­mit­ting study re­sults for pre­sen­ta­tion at an up­com­ing med­ical con­gress.

But Alvotech main­tains that the high­er con­cen­tra­tion fac­tor will be key, as, in the US, more than 80% of the pre­scrip­tions are for the high-con­cen­tra­tion ver­sion. 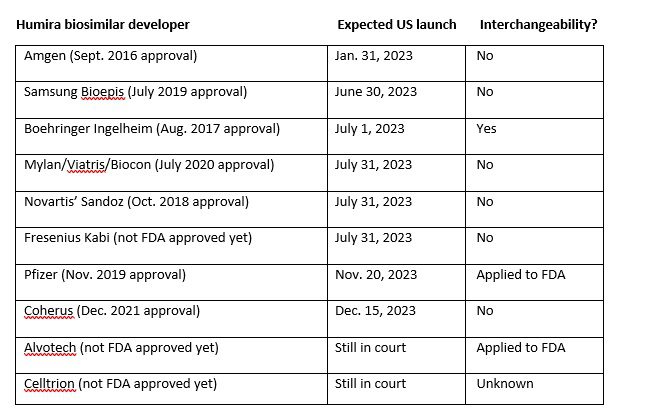 What’s still un­clear is how these in­ter­change­abil­i­ty des­ig­na­tions will help their spon­sors nab mar­ket share for their adal­i­mum­ab biosim­i­lars, as some be­lieve the des­ig­na­tion will make the biosim­i­lars more at­trac­tive to use or pre­scribe, but price could be a fac­tor.

The US is al­so not like­ly to see some of the ma­jor land­scape shifts in Eu­rope when Hu­mi­ra biosim­i­lars there first rolled out.