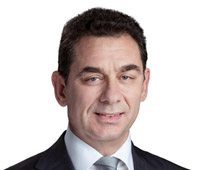 → Pfiz­er has pro­mot­ed its In­no­v­a­tive Health chief Al­bert Bourla to the new role of chief op­er­at­ing of­fi­cer, where he’s been giv­en a spe­cial man­date to over­see the day-to-day ac­tiv­i­ty around prod­uct de­vel­op­ment, sales and strat­e­gy. This has been in­ter­pret­ed as CEO Ian Read’s way of anoint­ing his suc­ces­sor, al­though that is far from cer­tain. The move, which be­comes of­fi­cial on Jan­u­ary 1, trig­gered a reshuf­fle in the top ranks at Pfiz­er. John Young, who heads Pfiz­er Es­sen­tial Health, takes Bourla’s old job, while An­gela Hwang suc­ceeds Young.

→ New York-based In­tra-Cel­lu­lar Ther­a­pies has brought on An­drew Satlin as chief med­ical of­fi­cer. The biotech spe­cial­iz­ing in cen­tral ner­vous sys­tem dis­or­ders man­aged to raise $150 mil­lion ear­ly Oc­to­ber part­ly to fund the pre-launch and com­mer­cial ac­tiv­i­ties for lu­mate­per­one, their lead drug in schiz­o­phre­nia, claim­ing that safe­ty con­cerns brought up in March have been cleared. That’s great tim­ing for Satlin to join, they say, as the No­var­tis vet brings in­sight from be­ing the glob­al head of med­i­cine cre­ation strat­e­gy, neu­rol­o­gy busi­ness group at Ei­sai.

→ In a boost to their con­sult­ing prac­tice, con­tract re­search or­ga­ni­za­tion Parex­el has re­cruit­ed three reg­u­la­to­ry/drug de­vel­op­ment staffers as their new vice pres­i­dents: Robert Is­er, VP of reg­u­la­to­ry con­sult­ing ser­vice; Bob (Bhard­waj) De­sai, VP of con­sult­ing, tech­ni­cal (on­col­o­gy); and Chang Lee, VP of con­sult­ing, APAC. To­geth­er, the trio brings ex­pe­ri­ence from the FDA and in­dus­try gi­ants such Pfiz­er and Ab­b­Vie — key sell­ing points as the CRO tries to prove it has much to of­fer out­side the lab.

→ Tony de Fougerolles, for­mer­ly chief sci­en­tif­ic of­fi­cer at Abl­ynx, is the new CEO of Ox­ford, UK-based Evox Ther­a­peu­tics. He takes over from co-founder Per Lundin, who will now fo­cus on be­ing COO. The young biotech aims to cre­ate a plat­form tech­nol­o­gy uti­liz­ing ex­o­somes — “foun­da­tion­al trans­porters in the hu­man body” — to cre­ate bio­ther­a­peu­tics, and fig­ures it could use some help from de Fougerolles, who has al­so helped ad­vance pipelines for Mod­er­na and Al­ny­lam.