So you just got a BTD for your top drug? Don't be sur­prised to see the en­thu­si­asm fiz­zle fast among in­vestors

We’ve al­ready seen stud­ies spot­light­ing how the FDA’s break­through ther­a­py des­ig­na­tion can lead doc­tors and pa­tients to get un­rea­son­ably pumped about a drug — even though that was nev­er the idea. But it seems that in­vestors have be­come large­ly im­mune to the buzz, at best los­ing in­ter­est quick­ly.

How do we know?

A group of re­searchers took a list of 218 BTDs, sliced away the ex-US and pri­vate com­pa­nies, and then tracked the stock re­ac­tion to the an­nounce­ment. Di­vid­ing the list in­to com­mer­cial and pre-com­mer­cial out­fits, they found that the more ma­ture com­pa­nies es­sen­tial­ly saw no re­sponse in the tick­er price. The less ma­ture pre-com­mer­cial biotechs got a clear pop on their stock price, but that just last­ed a few days and then quick­ly fiz­zled.

They re­port­ed their find­ings in Na­ture Re­views. 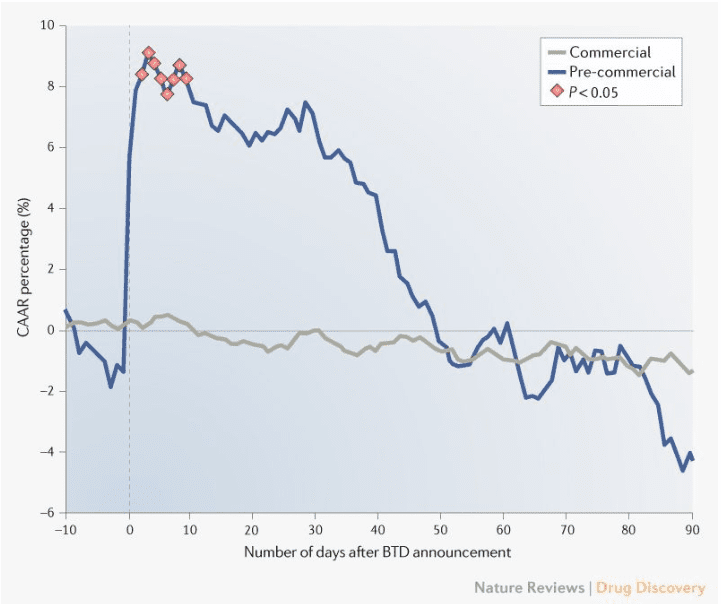 In the Pipeline blog­ger Derek Lowe took a look and of­fered his as­tute opin­ion that if you went back to the ear­ly days of the BTD pro­gram, you would prob­a­bly have seen more op­ti­mism on Wall Street. Clear­ly, though, that ex­cite­ment over a BTD an­nounce­ment fad­ed long ago. You get 218 press re­leas­es on the same thing, peo­ple stop jump­ing so fast.

For Big Phar­ma, it’s un­like­ly that the agency’s 6th or 7th BTD for an es­tab­lished prod­uct — say Keytru­da — would change any­one’s fi­nan­cial fore­cast. And even where it may have made a dif­fer­ence for a po­ten­tial block­buster — let’s call out J&J’s es­ke­t­a­mine, which was clear­ly helped out by the agency’s en­dorse­ment in its cam­paign to over­come more neg­a­tive than pos­i­tive piv­otal da­ta — it’s hard to in­flu­ence a mam­moth val­u­a­tion with a sin­gle BTD on a sin­gle pro­gram.

Of course, the FDA wasn’t try­ing to game the stock mar­ket with their BTD pro­gram. The FDA has re­peat­ed­ly held up BTDs, along with fast track des­ig­na­tions, etc, as their com­mit­ment to speed­ing up the process to reach a de­ci­sion — and few peo­ple in the in­dus­try would doubt their sin­cer­i­ty on that score. Over the last year we’ve al­so seen FDA com­mis­sion­er Scott Got­tlieb of­fer var­i­ous sug­ges­tions for fur­ther ac­cel­er­at­ing the process at a time over­all new drug ap­provals are rid­ing an all-time high.

All that does add val­ue in the in­dus­try — but it’s a long way from the kind of cat­a­lyst in­vestors look for.

So you just got a BTD for your top drug? Don't be sur­prised to see the en­thu­si­asm fiz­zle fast among in­vestors