Five years af­ter shelling out more than $5 bil­lion for Ari­ad Phar­ma­ceu­ti­cals and its rare leukemia drug Iclusig, Take­da is set­ting plans in mo­tion for a po­ten­tial la­bel ex­pan­sion in­to the first-line set­ting — but for now, the phar­ma gi­ant is keep­ing its cards close.

While re­searchers haven’t re­leased any hard da­ta, they did say that the open-la­bel study met its pri­ma­ry end­point by achiev­ing high­er rates of min­i­mal resid­ual dis­ease (MRD)-neg­a­tive com­plete re­mis­sion (CR) com­pared to Gleevec. 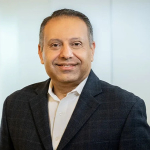 “It’s a large mag­ni­tude,” Awny Fara­jal­lah, Take­da’s glob­al head of med­ical af­fairs for on­col­o­gy, said in an in­ter­view. While de­clin­ing to get in­to specifics, he added that more in­for­ma­tion is com­ing soon. If ap­proved, Iclusig would be the first TKI avail­able for pa­tients in this front-line set­ting.

“We are cur­rent­ly in the process of dis­cussing with reg­u­la­tors on how we’re go­ing to ap­proach that, so the time frame is, it’s go­ing to be very soon,” Fara­jal­lah said.

Iclusig won an ac­cel­er­at­ed ap­proval back in 2012 to treat cer­tain pa­tients with Ph+ ALL and chron­ic, ac­cel­er­at­ed or blast phase chron­ic myeloid leukemia (CML) who have failed on or are in­tol­er­ant to pri­or TKI ther­a­py. A year lat­er, the drug was briefly sus­pend­ed over blood clot con­cerns, lead­ing the FDA to re­quire new safe­ty warn­ings in­clud­ing a de­scrip­tion of “ar­te­r­i­al and ve­nous throm­bo­sis and oc­clu­sions that have oc­curred in at least 27% — more than one in every four — of pa­tients treat­ed with Iclusig,” the agency said at the time.

A full ap­proval came in 2016 based on two-year fol­low-up da­ta, and Fara­jal­lah said those risks have been “ex­ten­sive­ly stud­ied” and char­ac­ter­ized on the drug’s la­bel, adding that “we don’t see any fur­ther con­cerns with it as we move for­ward.”

No new safe­ty sig­nals were iden­ti­fied in the PhALL­CON tri­al, he said.

While Iclusig faces stiff com­pe­ti­tion from ri­vals such as Pfiz­er’s Bo­sulif and No­var­tis’ Scem­blix, both ap­proved in Ph+ CML, Fara­jal­lah stressed that a front-line win would add a “very unique in­di­ca­tion” to the la­bel.

“There are cur­rent­ly no tar­get­ed ther­a­pies, as we’ve men­tioned, that can be used in that first line and I think that is why we are ex­cit­ed about this,” he said.