Over the last 5 years biotech has been boom­ing. And that could pose a big prob­lem for every­one in­volved.

Over the last 5 years, as mon­ey has been pour­ing in­to drug de­vel­op­ment, Porges found that there was an av­er­age in­crease in com­pet­i­tive­ness of 65% across the board, with a mean jump from 4 to 7 drugs per in­di­ca­tion.

But you haven’t seen any­thing yet. 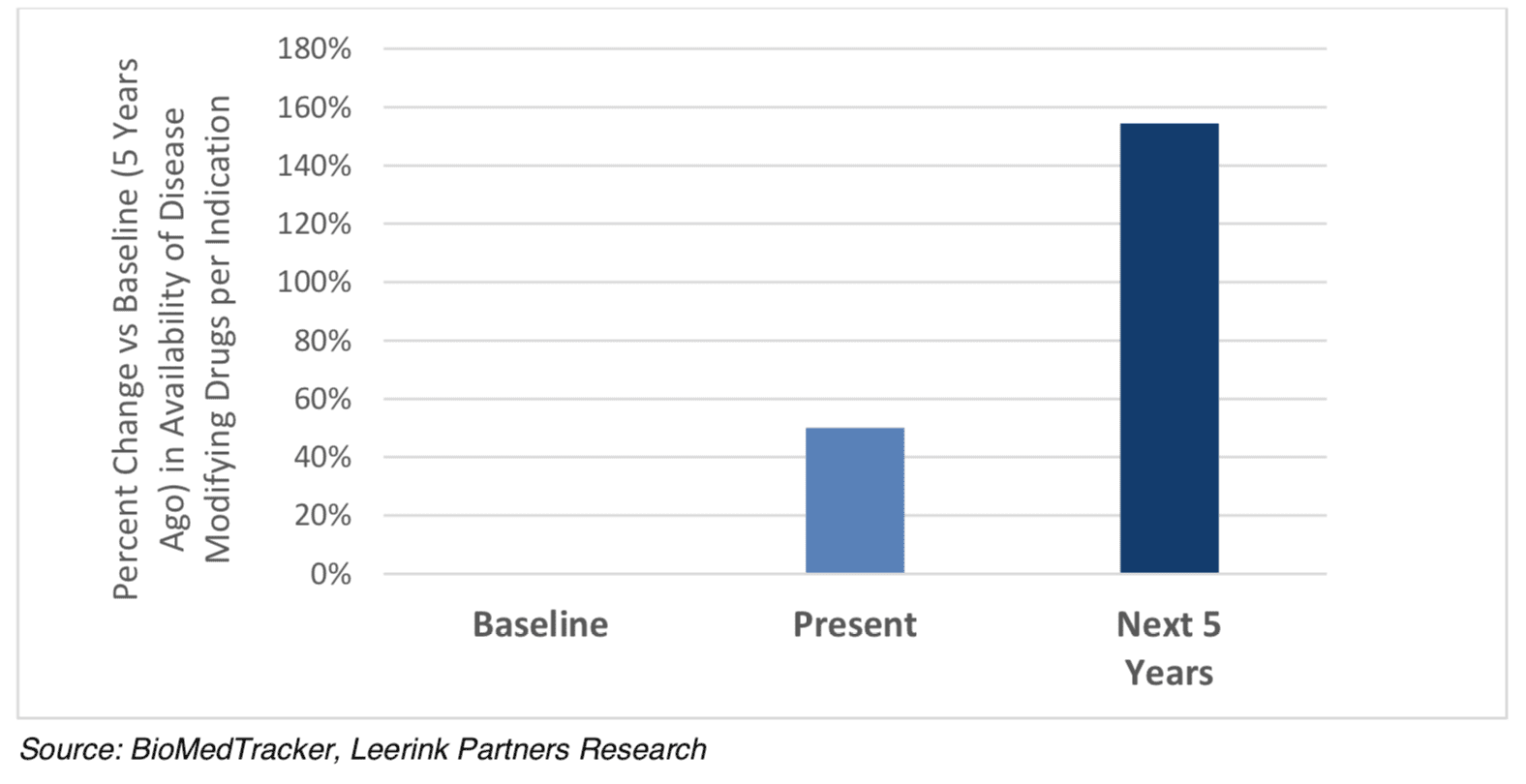 HIV is on the low end of that spec­trum, with PNH, atopic der­mati­tis and oth­er dis­eases on the high end.

Stat­ed an­oth­er way, com­pet­i­tive in­ten­si­ty in es­tab­lished and emerg­ing ther­a­peu­tic cat­e­gories is in­creas­ing, but more im­por­tant­ly, it ap­pears that the rate of in­crease in com­pet­i­tive in­ten­si­ty is ac­cel­er­at­ing. By the be­gin­ning of 2024 it ap­pears that many of these emerg­ing in­di­ca­tions could see up to three times as many nov­el med­i­cines as they do to­day.

These drugs will be pour­ing in­to a com­mer­cial sys­tem that is like­ly to re­ward in­fe­ri­or drugs priced at low­er rates, dis­rupt­ing the mar­ket in ways that could have a big im­pact on pric­ing and rev­enue po­ten­tial for every­one in­volved.

In ad­di­tion, this trend isn’t just lim­it­ed to the big dis­eases that com­mand big bucks, like lung can­cer. Com­pe­ti­tion is grow­ing every­where, with a rapid es­ca­la­tion in dis­eases like SMA and pem­phi­gus.

These dis­eases are like­ly to go from un­der­served five years ago, to high­ly com­pet­i­tive with many treat­ment op­tions, in the course of a 5 to 10 year span. Con­cern about the com­mer­cial risks from this in­creased com­pet­i­tive in­ten­si­ty has cre­at­ed val­u­a­tion over­hangs for two of our cov­er­age com­pa­nies pri­mar­i­ly in­vest­ed in these mar­kets, Bio­gen (BI­IB, MP) and Prin­cip­ia (PRNB, OP), and sim­i­lar con­cerns al­ready weigh on the val­u­a­tion out­look for com­pa­nies de­vel­op­ing drugs for oth­er rare, and rel­a­tive­ly rare, dis­ease in­di­ca­tions.

With an eye on kick-starting Phase III for its mRNA vaccine in July, Moderna said it’s dosed the first participants of each age cohort enrolled in the Phase II study.

Moderna is responsible for the whole trial, which is designed to recruit 600 healthy volunteers — 300 between the ages of 18 and 55, and another 300 older than 55. Two doses (50 μg and 100 μg) will be tested alongside placebo, and each participant receives two shots.