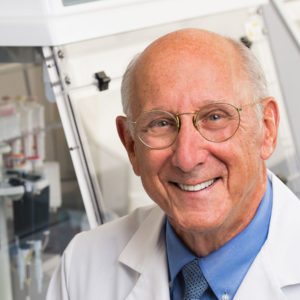 This week, a re­search team led by the NIH’s Steven Rosen­berg — whose work has been used as a ba­sis of Kite Phar­ma’s pi­o­neer­ing CAR-T — rolled out ear­ly proof-of-con­cept da­ta from a small hu­man study us­ing a CD4+ T cell adapt­ed with a T cell re­cep­tor that ze­roes in on MAGEA3, or melanoma-as­so­ci­at­ed anti­gen A3.

Prepped with a lym­phode­ple­tion reg­i­men and in­fused with a pu­ri­fied batch of cell ther­a­py, the re­searchers treat­ed 17 pa­tients. One pa­tient ex­pe­ri­enced a com­plete re­sponse which is on­go­ing at 29 months. Of 9 pa­tients treat­ed at the high­est dose, three suf­fer­ing from esophageal can­cer, urothe­lial can­cer, and os­teosar­co­ma had par­tial re­spons­es.

KITE-718 is al­ready in the clin­ic, and it’s been de­signed along the same TCR en­gi­neer­ing that Rosen­berg was try­ing out at the NIH.

There were no signs of such tox­i­c­i­ty in the NIH study, but you can bet that af­ter the big safe­ty is­sues that af­flict­ed ear­ly CAR-T stud­ies, it will be a ma­jor fo­cus for all con­cerned.

“We are very ex­cit­ed by the re­sults of this study con­duct­ed by our col­lab­o­ra­tors at the NCI, demon­strat­ing the po­ten­tial of TCR en­gi­neered T-cell ther­a­py in com­mon sol­id tu­mors,” said David Chang, Kite’s CMO. “The KITE-718 pro­gram is built up­on this proof of con­cept study and in­cor­po­rates Kite’s next gen­er­a­tion T-cell man­u­fac­tur­ing tech­nol­o­gy that is de­signed to en­hance cell ex­pan­sion and per­sis­tence. The find­ings from the NCI study will help in­form us as we ad­vance KITE-718 for the treat­ment of metasta­t­ic sol­id can­cers, for which there is a great un­met med­ical need.”