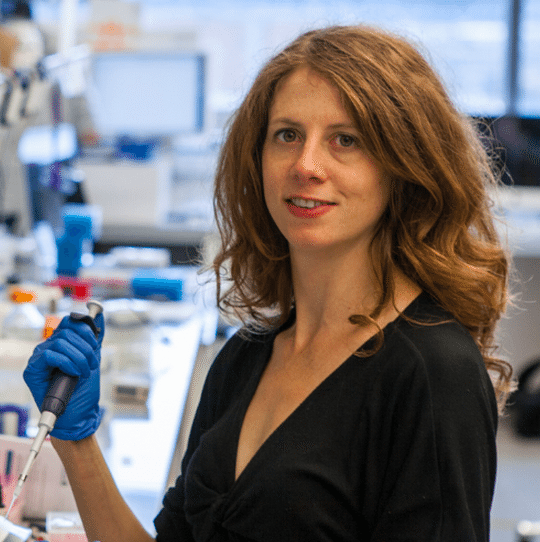 Here’s a non­tra­di­tion­al way to set up a biotech com­pa­ny and shoot straight at a buy­out.

About six years ago, In­grid Swan­son Pultz ad­vised a group of stu­dents at the Uni­ver­si­ty of Wash­ing­ton who took on the chal­lenge of us­ing 3D struc­ture pro­tein de­sign tech to de­vel­op a new ther­a­py for celi­ac dis­ease, marked by a se­vere re­ac­tion to gluten.

Start­ing out with an en­zyme that could with­stand the harsh, acidic en­vi­ron­ment of the stom­ach, they en­gi­neered it specif­i­cal­ly to go af­ter frag­ments of gluten that trig­ger a gut re­ac­tion. And they did well, win­ning a pres­ti­gious com­pe­ti­tion.

But Pultz didn’t stop there.

She con­tin­ued to work on the en­zyme dur­ing her post­doc days and then as a fac­ul­ty mem­ber at the In­sti­tute for Pro­tein De­sign at the Uni­ver­si­ty of Wash­ing­ton. Grant mon­ey was avail­able to go far be­yond the usu­al bound­aries that can lim­it an aca­d­e­m­ic project, she tells me, tak­ing it right up to the clin­ic. A cou­ple of months ago her ther­a­py — now called Ku­ma­Max — was spun out in a start­up dubbed PvP Bi­o­log­ics. And to­day Take­da is an­nounc­ing that it is putting up $35 mil­lion to cov­er a Phase I proof of con­cept study, with an op­tion to buy the new­ly cre­at­ed com­pa­ny for an undis­closed pack­age of fees and mile­stones.

PvP is a sin­gle-as­set play with a small team, five peo­ple in San Diego, where Adam Simp­son is pres­i­dent and CEO. And Swan­son re­mains in Seat­tle with a team of three.

Pultz may do bet­ter than any of them, in less time. The Take­da deal puts her new com­pa­ny on a short track to a po­ten­tial ac­qui­si­tion, and the PvP team will get through Phase I with­out rais­ing a tra­di­tion­al round from a ven­ture group.