In an era where drug­mak­ers and pre­scrip­tion drug man­agers (PBMs) point fin­gers at each oth­er when it comes to jus­ti­fy­ing the rea­sons be­hind ris­ing drug prices — the largest US PBM, Ex­press Scripts, on Wednes­day re­leased a re­port in­di­cat­ing that in 2018 em­ploy­er-spon­sored plans paid rough­ly 6 cents more, on av­er­age, for a 30-day pre­scrip­tion (0.4% hike) ver­sus the pre­ced­ing year, mark­ing the small­est in­crease in com­mer­cial plans in a quar­ter cen­tu­ry. 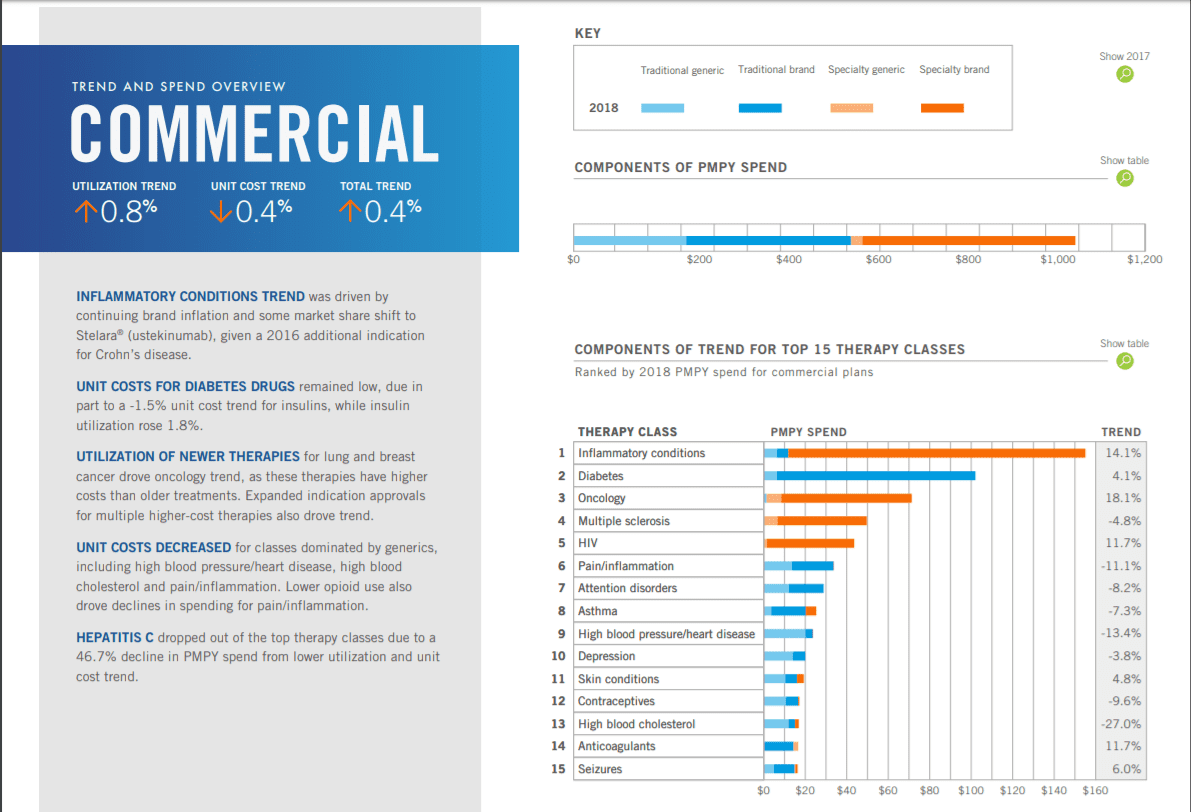 De­spite list price in­fla­tion of 7.3% for the most com­mon­ly used tra­di­tion­al brand med­ica­tions in 2018, costs for such drugs dipped 6.5% for its em­ploy­er-spon­sored plans, Ex­press Scripts said.

The com­pa­ny has dri­ven a 0.4% de­cline in drug unit costs by steer­ing mem­bers to low­er cost ther­a­pies, and by se­cur­ing deep­er dis­counts from man­u­fac­tur­ers and phar­ma­cies, it said, adding that about half of com­mer­cial plans saw a fall in per mem­ber drug spend­ing, and a 0.3% de­cline across Medicare plans.

Twen­ty five years ago, the era of block­buster drugs was tak­ing off, char­ac­ter­ized by mid-to-high-dou­ble-dig­it an­nu­al in­creas­es in drug spend­ing, the com­pa­ny said, not­ing that to­day we are in the age of break­through treat­ments with “break-the-bank pric­ing.”

“We ex­pect man­u­fac­tur­ers of high-priced spe­cial­ty drugs, which cur­rent­ly con­sume half of all drug spend­ing, to con­tin­ue to raise prices faster than core in­fla­tion. And we ex­pect the con­tentious pub­lic pol­i­cy de­bate on how to make pre­scrip­tion med­i­cine, and es­pe­cial­ly in­sulin and oth­er bi­o­log­ics, more af­ford­able for the unin­sured and un­der­in­sured to con­tin­ue,” the com­pa­ny said, fore­cast­ing an an­nu­al drug trend of 2% for the next three years.

Da­ta in­creas­ing­ly sug­gest that pric­ing is con­tribut­ing to a small­er slice of bio­phar­ma growth than ever be­fore. In a note pub­lished ear­li­er this week, Leerink’s Ge­of­frey Porges said “pos­i­tive list pric­ing has con­tributed at least two thirds of in­dus­try growth in re­cent years and this con­tri­bu­tion ap­pears to be fad­ing, if not dis­ap­pear­ing…in many strik­ing cas­es we are see­ing sig­nif­i­cant ab­solute re­duc­tions in price, which was pre­vi­ous­ly un­think­able for this in­dus­try.” For ex­am­ple, PC­SK9 an­ti­bod­ies by Am­gen as well as part­ners Sanofi and Re­gen­eron have re­cent­ly seen heavy dis­counts, while CGRP an­ti­bod­ies from Te­va, Lil­ly as well as part­ners Am­gen and No­var­tis have tak­en a large­ly con­ser­v­a­tive ap­proach to pric­ing.

Drug pric­ing has emerged as a bi­par­ti­san is­sue and a host of law­mak­ers, in­clud­ing those rep­re­sent­ing the Trump ad­min­is­tra­tion, have pro­posed a num­ber of so­lu­tions to low­er the bur­den of drug costs on con­sumers.