The com­pa­nies first re­port­ed the drug had met the main goal in the ARAMIS tri­al last Oc­to­ber. The tri­al test­ed daro­lu­tamide against a place­bo in more than 1,500 pa­tients with non-metasta­t­ic cas­tra­tion-re­sis­tant prostate can­cer (nm­CR­PC) that were al­ready on stan­dard-of-care an­dro­gen de­pri­va­tion ther­a­py, and were at high risk of the dis­ease spread­ing. 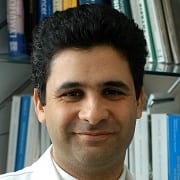 Bay­er, which al­ready sells Xofi­go for metasta­t­ic prostate can­cer, said it plans to dis­cuss ARAMIS da­ta with health reg­u­la­tors re­gard­ing mar­ket­ing ap­pli­ca­tions. The drug has al­ready se­cured fast-track sta­tus with the FDA as a treat­ment for nm­CR­PC. But Bay­er may be late to the par­ty, with oth­er such an­dro­gen re­cep­tor in­hibitors such as Pfiz­er’s $PFE Xtan­di as well as J&J’s $JNJ new­er Er­lea­da al­ready on the mar­ket.