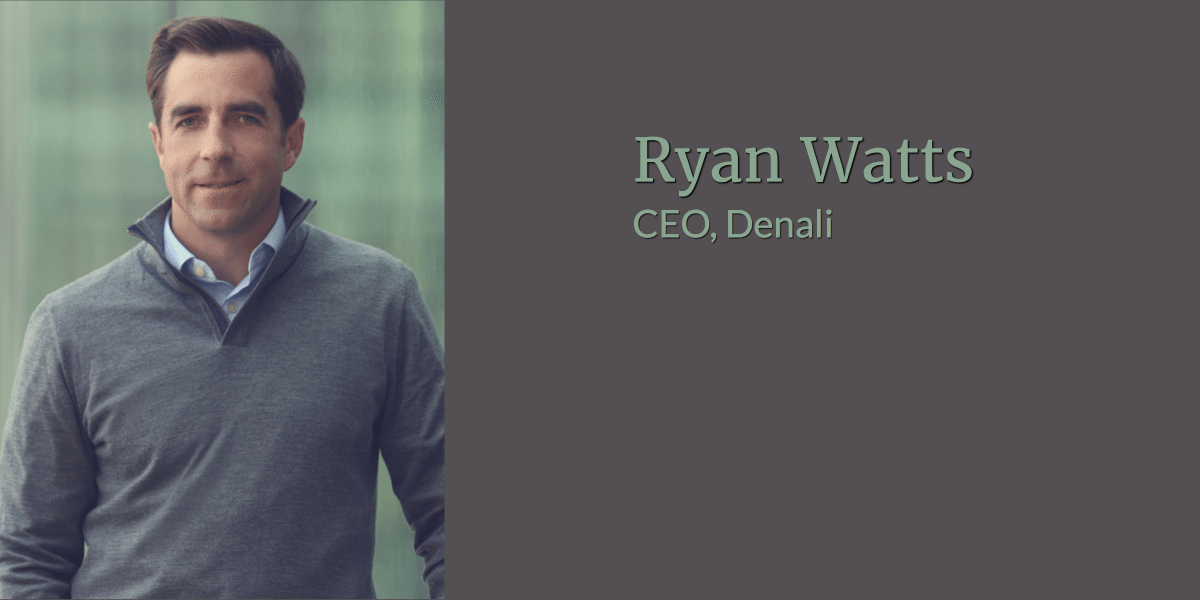 South San Fran­cis­co-based up­start De­nali Ther­a­peu­tics has been busy. A lit­tle more than a year af­ter mak­ing a splash with its $217 mil­lion start­up round de­signed to fund a new breed of neu­rode­gen­er­a­tion drug de­vel­op­er, the biotech is back with an­oth­er megaround fi­nanc­ing and a string of deals topped by a move in­to the clin­ic for its lead drug.

De­nali is go­ing big, ear­ly on. The sec­ond chap­ter in De­nali’s sto­ry starts with a $130 mil­lion Se­ries B, bring­ing its to­tal close to $350 mil­lion. And it’s lin­ing up a Phase I study for a small mol­e­cule RIP1 in­hibitor tar­get­ing glial dys­func­tion, where De­nali hopes to start es­tab­lish­ing a track record for suc­cess against ALS and Alzheimer’s.

Start­ing from scratch, the team at De­nali — large­ly ex-Genen­tech staffers who have struck out on their own — has set out to build a com­pa­ny that they be­lieve can suc­ceed af­ter many of the gi­ants in the in­dus­try have paid heav­i­ly for more than a decade of fail­ure.

“We’ve looked at part­ner­ing as a means to build­ing the port­fo­lio,” Chief Op­er­at­ing Of­fi­cer Alex Schuth tells me, high­light­ing a first set that in­cludes two fo­cused on con­quer­ing the blood-brain bar­ri­er, which has thrown a host of ear­li­er drugs off tar­get. Here they are, in se­quence:

The staff at De­nali, mean­while, has swelled to 80, says CEO Ryan Watts, who adds that that num­ber will con­tin­ue to grow as the biotech signs up with more col­lab­o­ra­tors and builds its first 10 pro­grams for the clin­ic.

Chief Med­ical Of­fi­cer Ca­r­ole Ho says she’s been re­view­ing hun­dreds of pa­pers and some 80 failed stud­ies in this field to prep for the com­ing de­vel­op­ment work, look­ing to avoid the same pit­falls.

“This may sounds like Drug 101,” she says, but De­nali’s suc­cess af­ter so many fail­ures will get down to its abil­i­ty to en­gage the tar­get, with the right kind of bio­mark­ers in place to track their suc­cess. De­vel­op­ing bio­mark­ers ear­ly, she adds, is crit­i­cal. And the bi­ol­o­gy of these dis­eases is be­com­ing more clear through the rapid ad­vance of ge­net­ics re­search.

RIP1, ApoE and LRRK2 have nev­er re­al­ly been test­ed be­fore, adds the CEO, giv­ing De­nali a “much bet­ter start­ing point.”

The deal with F-star starts small, but could wind up in the big leagues. De­nali is pay­ing $6 mil­lion to get a new op­er­a­tion dubbed F-star Gam­ma off the ground, F-star CEO John Hau­rum tells me. De­nali will al­so fund the re­search work, head­ing to a cross­roads where De­nali can ei­ther pick up an op­tion to buy the op­er­a­tion for $450 mil­lion or ink a li­cens­ing pact for the rights to its bis­pecifics. The op­tion de­ci­sion falls ahead of Phase I, says Hau­rum, and if the biotech choos­es to go the li­cens­ing route, the mile­stones could add up to more than $1 bil­lion.

The in­ten­tion here is to get the right syn­di­cate to­geth­er to back a com­pa­ny that has years of ex­pen­sive re­search work ahead be­fore it can es­tab­lish a clear proof-of-con­cept case that its on the right track, says CFO Steve Krognes.

So is an IPO in sight? De­nali’s ex­ec­u­tive team will on­ly say that it has plen­ty of re­sources at this stage, and more than enough of time to con­sid­er all the ways to con­tin­ue to fund the work, whether that means more mon­ey from the syn­di­cate, an IPO at some point, or a part­ner­ship or two with a ma­jor al­ly that could al­so sup­port their work.

The way they’re go­ing, De­nali may take every­thing on the ta­ble.

The drug, known as ofatumumab or Arzerra, has performed consistently well across late-stage trials in patients with the most common form of MS, including in head-to-head studies against Sanofi’s old blockbuster Aubagio. But, if the drug is approved, Novartis will find itself in a crosstown game of catch-up; since a 2017 approval, Roche’s Ocrevus has become the second best-selling MS drug on the market, nearly eclipsing Biogen’s Tecfidera last quarter with over a $1 billion in sales.

American patients who suffer from conditions other than Covid-19 could feel the impact of the coronavirus due to shortage of drugs — as 150 prescription drugs are now reportedly on a list of at-risk therapies. The list spans “antibiotics, generics and some branded drugs without alternatives,” Axios reported citing sources familiar with the list. The FDA declined to comment.

Although factories in China are gradually reopening, restrictions in travel and disruptions at transit hubs are still slowing down production. An Indian company that relies on active pharmaceutical ingredients (API) from China told Bloomberg last week that it’s seeing prices of commonly used drugs jump by 40% to 70%.

To provide researchers with more accurate and accessible data about historic drug approvals, the FDA on Friday released a dataset containing information about all new drugs and biologics approved by the Center for Drug Evaluation and Research (CDER) dating back to 1985.

“FDA created the compilation to facilitate data accessibility, transparency, and accuracy when researchers seek information about an approved drug,” the FDA writes, adding that the compilation should accurately reflect “the state of each application at the time of initial regulatory approval.”