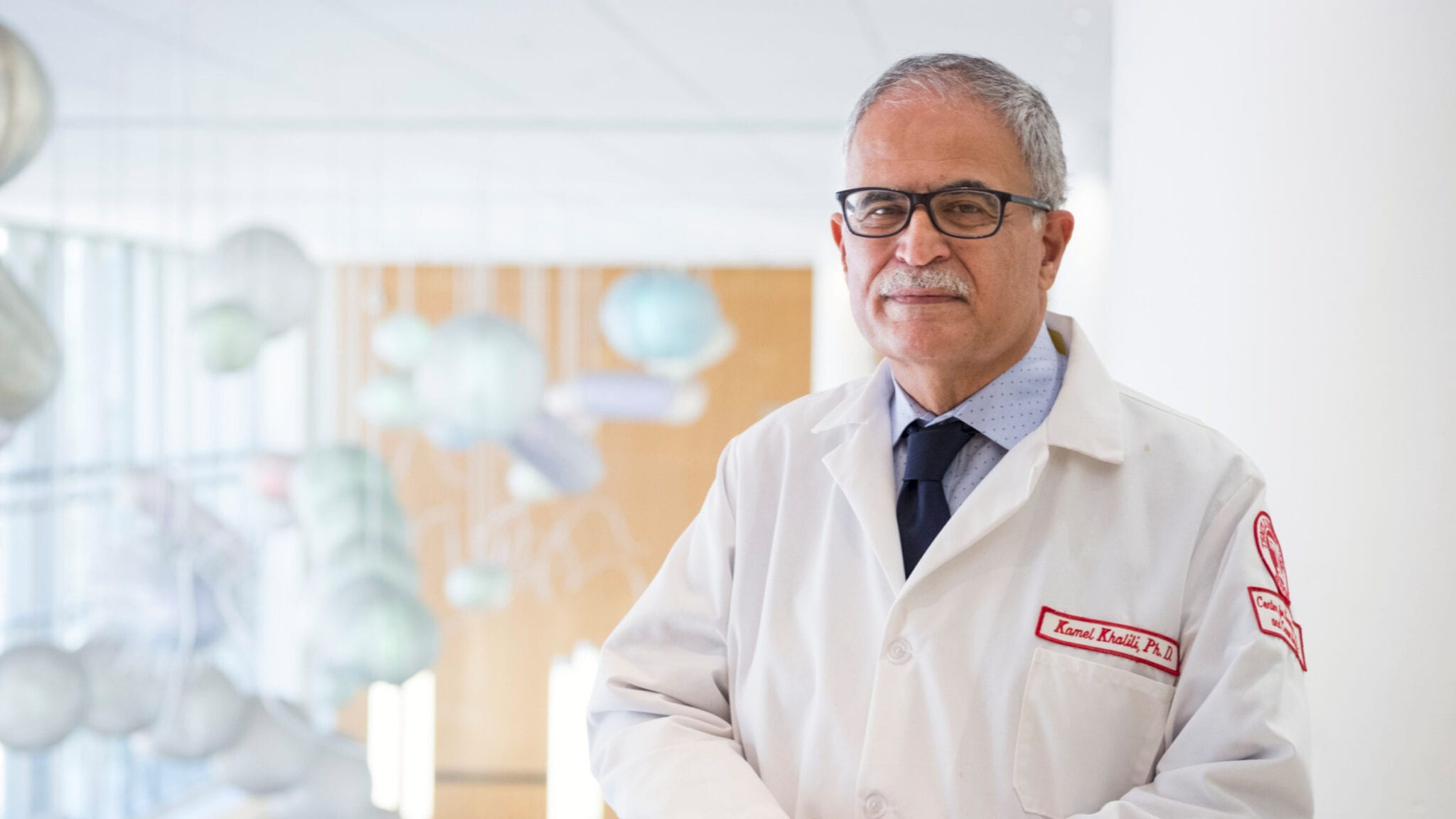 In the downtime between experiments, Kamel Khalili and his mentor traded their wildest ideas for curing HIV. It was the mid 1980s and Khalili was a postdoc at George Khoury’s National Cancer Institute lab, where he studied links between viruses and tumors, then one of the hottest fields in cancer research. But the epidemic was raging through New York and San Francisco, mounting the largest public health threat in decades. A couple buildings over, Robert Gallo was sequencing the virus for the first time. It felt impossible to stay away.

There was one idea Khalili couldn’t stop thinking about. HIV posed a unique challenge in part because it integrated itself into human DNA, coiling away from the body’s defenses. Khalili had spent his grad days tinkering with one of the earliest tools biologists invented to manipulate DNA inside a living cell. In fact, the first experiment he was assigned to when he moved from Tehran to Philadelphia as a 27-year-old graduate student was to take a bacteria-infecting virus and use it to inactivate a gene inside E. coli.

He wondered if he could do the same to the HIV genes inside a patient’s cells — an idea, he knew, was as ludicrous as it was elegant.

“Obviously the tool wasn’t there,” Khalili recalls. The tools they had struck DNA randomly, subjecting the recipient to a scattershot of genetic artillery. “You’d kill the patient.”

Then in 2012 came CRISPR, the so-called molecular scissors that could cut DNA wherever a researcher wanted. Khalili, who had risen to run a vast neuroscience department at Temple University without ever giving up on his youthful whim, rushing to examine a new gene editing tool whenever it appeared, got to work. Within a year and a half of Jennifer Doudna and Emmanuelle Charpentier’s Nobel-winning Science paper, he submitted a manuscript to The Proceedings of the National Academy of Sciences that would send ripples through the HIV field.

He had taken CRISPR and used it to excise HIV out of human DNA. When he put it in HIV-infected mice a few years later, about a third were cured.

“I’ve been working on HIV for close to 40 years,” says Khalili. Now 69, he has an easy, avuncular laugh even over Zoom and large expressive eyebrows, though colleagues tell me he can have a far harder edge in the lab. “For the first time we realized a cure was possible.”

In November, Khalili gave the first evidence the approach could work in monkeys. Investors are now getting on board. Excision BioTherapeutics, the company founded around Khalili’s work, announced today a $50 million Series A to push the therapy into the clinic. If it works as intended, it could provide a long-sought single-shot cure for a virus that now infects 38 million people worldwide and set the stage for a similar approach for other chronic viruses, such as herpes and hepatitis B.

In a field already burned countless times, outside researchers are understandably cautious: CRISPR is a powerful tool, they say, but trying to excise all the viral DNA lurking in a patient’s cells is like trying to plumb an oil spill; there’s always a bit left, tucked in hard-to-reach places. Still, many were impressed he got this far, having discounted the approach years before. And they broadly agreed that Khalili may have invented one of the weapons for the multi-pronged assault they think will one day take down the virus.

The first test will come later this year, when a group of patients will be injected with Khalili’s therapy and, eventually, taken off the anti-retroviral medicines that have kept their infections at bay. If the infections don’t return, they will owe it to an immigrant scientist, who flung himself into a crisis much of his adopted country ignored and for four decades never let go of a brash and maybe even brilliant idea, even when the tools didn’t exist and the NIH told him it was impossible.

Skepticism still runs high, just not as high as when Khalili first started sketching out the idea to friends and colleagues on napkins nearly a decade ago.

“We have to be very careful,” says Fyodor Urnov, a gene editing expert at Cal-Berkeley who worked on early HIV gene editing studies. “But I think, overall, the field can move from hypothetical to realistic optimism.”