The Eu­ro­pean Med­i­cines Agency on Tues­day warned that it could lose a ma­jor­i­ty of its staff based on which of the 19 cities vy­ing to host the med­i­cines reg­u­la­tor is se­lect­ed by the Eu­ro­pean Coun­cil in No­vem­ber, threat­en­ing the pace of new drug ap­provals even in best-case sce­nar­ios for at least two years.

Based on the re­sults of a sur­vey com­plet­ed by 92% of EMA’s staff ear­li­er this month, the agency says it could lose be­tween 19% and 94% of its staff de­pend­ing on which city is se­lect­ed as its fu­ture host. Politi­co first re­port­ed that Am­s­ter­dam is the top choice among EMA staff.

Af­ter Am­s­ter­dam, just three ad­di­tion­al un­named cities are pro­ject­ed to pro­vide enough cov­er to main­tain the reg­u­la­tor’s ba­sic safe­ty mon­i­tor­ing mis­sion.  “For cer­tain lo­ca­tions staff re­ten­tion rates could be sig­nif­i­cant­ly less than 30% [re­ten­tion]. This would mean that the Agency is no longer able to func­tion and, as there is no back­up, this would have im­por­tant con­se­quences for pub­lic health in the EU,” the EMA says.

The Eu­ro­pean Com­mis­sion is ex­pect­ed the com­plete its as­sess­ment of the 19 of­fi­cial of­fers to host EMA in the next few days. And, fol­low­ing a po­lit­i­cal dis­cus­sion in Oc­to­ber, the 27 EU mem­ber states, mi­nus the UK, will vote on the agency’s fu­ture lo­ca­tion at the EU Gen­er­al Af­fairs Coun­cil meet­ing in No­vem­ber.

For the sur­vey, EMA staff were asked to rate how like­ly they were to stay with the agency for each of the 19 can­di­date cities. EMA then took the re­sults of the sur­vey and di­vid­ed the cities in­to four groups based on the lev­el of ex­pect­ed em­ploy­ee re­ten­tion. 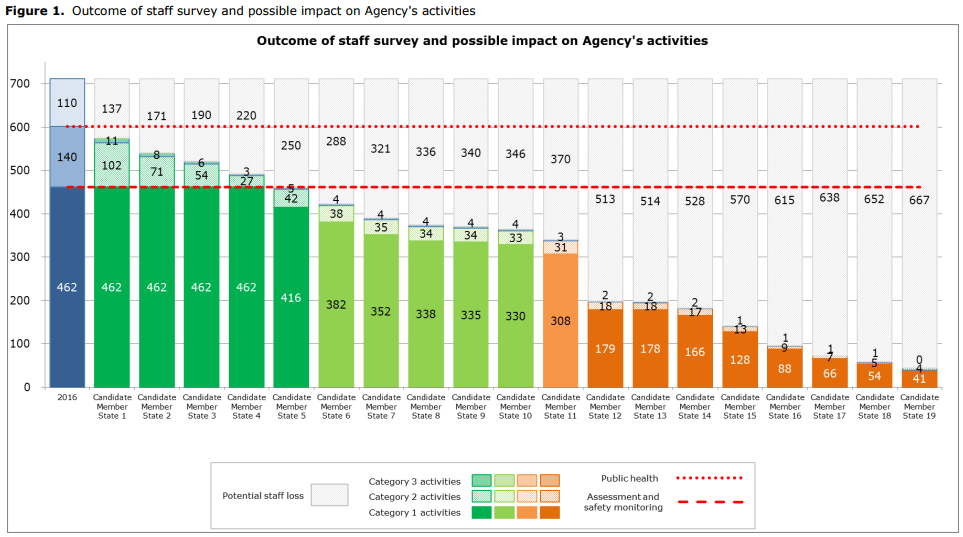 While the sur­vey re­port does not iden­ti­fy the cities by name, EMA says the re­sults re­flect staff mem­bers’ per­son­al as­sess­ments of whether the can­di­date cities meet their needs based on the in­for­ma­tion pre­sent­ed in the cities’ of­fi­cial bids and staff mem­bers’ own re­search in­to the lo­ca­tions.

Even in the best case sce­nar­ios, EMA says to ex­pect de­lays in ap­prov­ing new med­i­cines and slowed progress on oth­er pub­lic health ini­tia­tives for the next two to three years.

In the worst cas­es, EMA says it would be “un­able to op­er­ate” and the EU and mem­ber states would need to im­ple­ment emer­gency mea­sures to pro­tect pub­lic health, such as re­ly­ing on third coun­tries for ap­proval de­ci­sions.