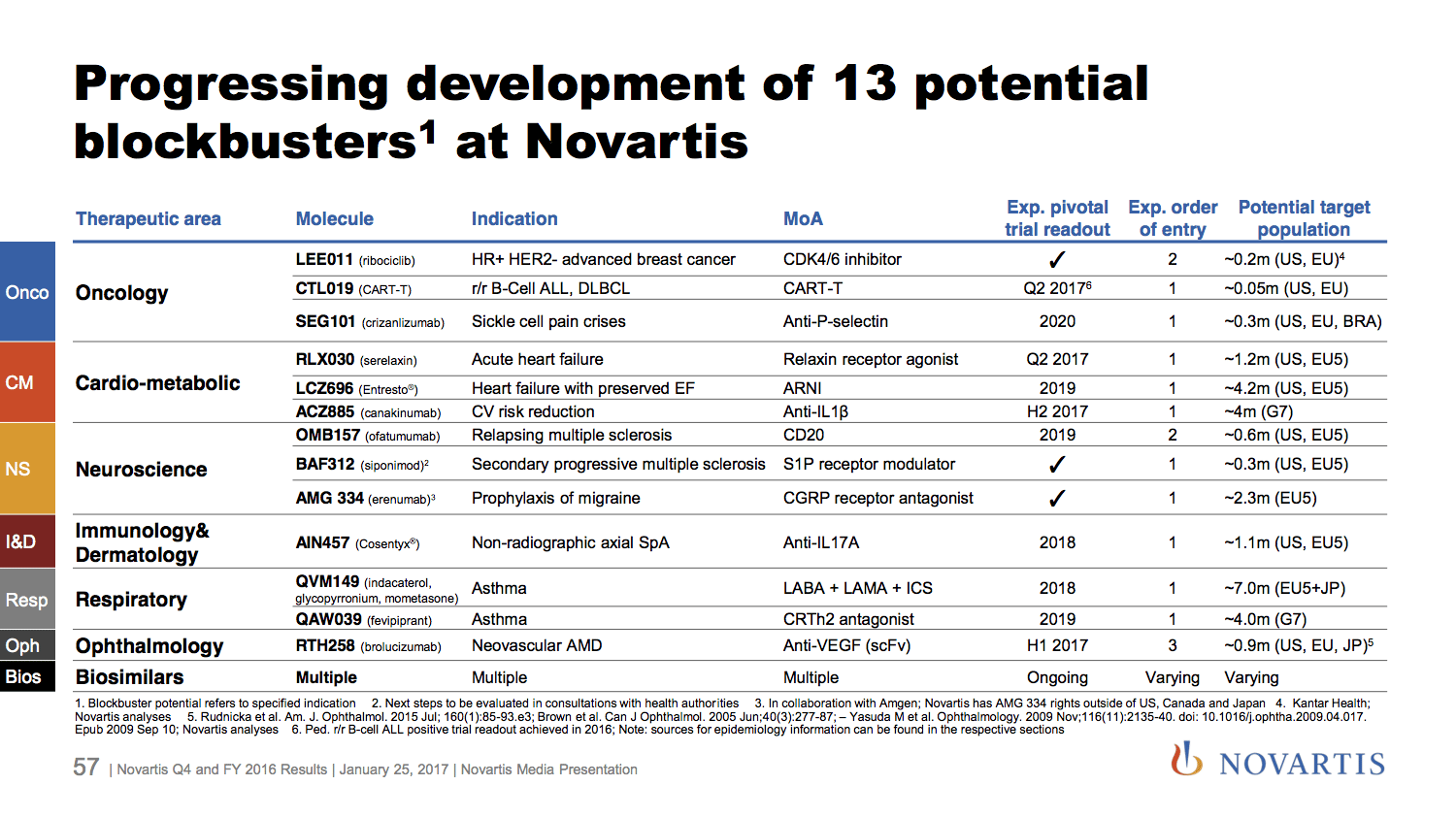 One of the rea­sons why No­var­tis isn’t be­ing forced to bid in­to the stratos­phere for late-stage drugs is that its in­dus­try-top­ping R&D bud­get — $9 bil­lion last year — has al­ready fund­ed one of the biggest late-stage pipelines in the in­dus­try. The phar­ma gi­ant un­der­scored that to­day as it out­lined 13 prospec­tive block­busters with up­com­ing piv­otal read­outs in the com­ing months and years, a group that now in­cludes its lead CAR-T ther­a­py for the very first time. And it added more de­tails on its im­muno-on­col­o­gy strat­e­gy, which has lagged be­hind lead­ers like Mer­ck, Bris­tol-My­ers Squibb and Roche.

The CDK 4/6 in­hibitor LEE011 is its most ad­vanced ther­a­py in Phase III. But No­var­tis is plan­ning an am­bi­tious roll­out of da­ta and reg­u­la­to­ry fil­ings as it looks to push past some pun­ish­ing gener­ic com­pe­ti­tion that has blunt­ed its rev­enue growth. It’s al­so look­ing at a slate of sec­ond-gen­er­a­tion im­muno-on­col­o­gy pro­grams, with some 20 clin­i­cal stud­ies in the field un­der­way in ear­ly 2017.

As we al­ready knew, its CAR-T CTL019 will be filed for pe­di­atric ALL some­time in the very near fu­ture, with piv­otal tri­al da­ta wait­ing in Q2. An­oth­er fil­ing for DL­B­CL is com­ing up in the sec­ond half of the year – with a ma­jor read­out from JULI­ET – and No­var­tis is step­ping up its game by bull­ish­ly as­sert­ing its $1 bil­lion-plus an­nu­al sales po­ten­tial.

No­var­tis’ bull­ish fore­cast fol­lows its con­tro­ver­sial move to shut­ter its in­de­pen­dent cell and gene ther­a­py unit, ax­ing about 120 staffers in the process. The phar­ma gi­ant, though, spec­i­fied that it not on­ly hasn’t aban­doned its CAR-T pipeline as it en­gi­neered its lat­est glob­al re­or­ga­ni­za­tion of R&D, it’s up­ping its game.

That could present some new pres­sure on Kite, which is hus­tling along its own rolling sub­mis­sion for a pi­o­neer­ing CAR-T, while Juno has yet to de­cide what it will do with its trou­bled lead CAR-T, now stymied by a num­ber of pa­tient deaths.

No­var­tis al­so has a cat­a­lyst rich year planned, with sub­mis­sions on AMG334 for mi­graine, part­nered with Am­gen, as well as BAF312 for sec­ondary pro­gres­sive MS. You can get the full pic­ture here, on pages 57 and 58.