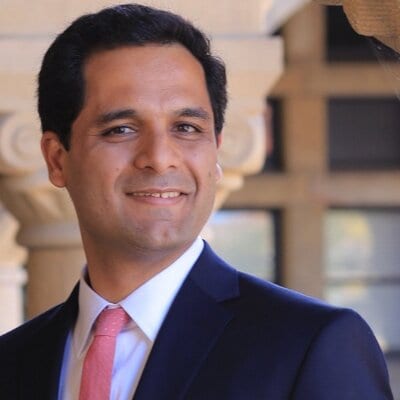 “Med­i­cine is bro­ken com­pared to oth­er tech­nol­o­gy,” he told End­points News. “It means a lot for bio­phar­ma…  it’s go­ing to make a big im­pact on what’s go­ing on with bi­ol­o­gy, both for the pa­tient se­lec­tion and it’s very im­por­tant for clin­i­cal tri­als.”

Es­fand­yarpour is the CEO and founder of Genap­sys, and the de­vice is his long-billed DNA se­quencer. It’s hooked up to the cloud and the white pad­dle ac­tu­al­ly con­tains a slot for a se­quenc­ing chip on which you place the DNA sam­ple.

Speak­ing at con­fer­ences, lec­ture halls, and to Face­book bil­lion­aire Yuri Mil­ner, Es­fand­yarpour has promised for sev­er­al years that the 9.5-pound de­vice will make DNA se­quenc­ing faster and cheap­er — an iPad was his com­mon point of com­par­i­son, al­though the launch prod­uct is larg­er — and thus ush­er med­i­cine in­to the big da­ta era. Now with $90 mil­lion in back­ing from Fore­site Cap­i­tal and oth­ers, that de­vice is hit­ting the mar­ket.

Es­fand­yarpour’s back­ground is in elec­tri­cal en­gi­neer­ing and he’s been say­ing med­i­cine is bro­ken for some time now, telling Stan­ford stu­dents in 2017 “Steve Jobs claimed to be a prophet, I was in his re­li­gion” and “we can move atoms… but when it comes to med­i­cine we’re still in the cave age.” This area of med­i­cine, though, has been cor­nered and guard­ed for some time. Il­lu­mi­na now counts sales over $3.3 bil­lion per year and a mar­ket cap of $43 bil­lion. With an eye to­ward up­starts such as Nanopore and Ion Tor­rent, they’ve rolled out new prod­ucts such as their No­vaSeq $100 af­ford­able op­tion.

Much of that tech al­ready ex­ists in some form, though, Ro­bi­son said. He thinks ul­ti­mate­ly there is room for Genap­sys to break in, but it will de­pend on how good the ear­ly edi­tions are. He re­called Nanopore get­ting blast­ed on Twit­ter when ear­ly ver­sions of their plat­form gave in­ac­cu­rate read­outs. The tech im­proved but the rep­u­ta­tion stuck.

“The thing prob­a­bly is re­al, but can they re­al­ly ex­e­cute?” Ro­bi­son said. “Does the thing work as it ad­ver­tised? When I get one, does it re­al­ly be­have or is it like an As Seen On TV thing?”