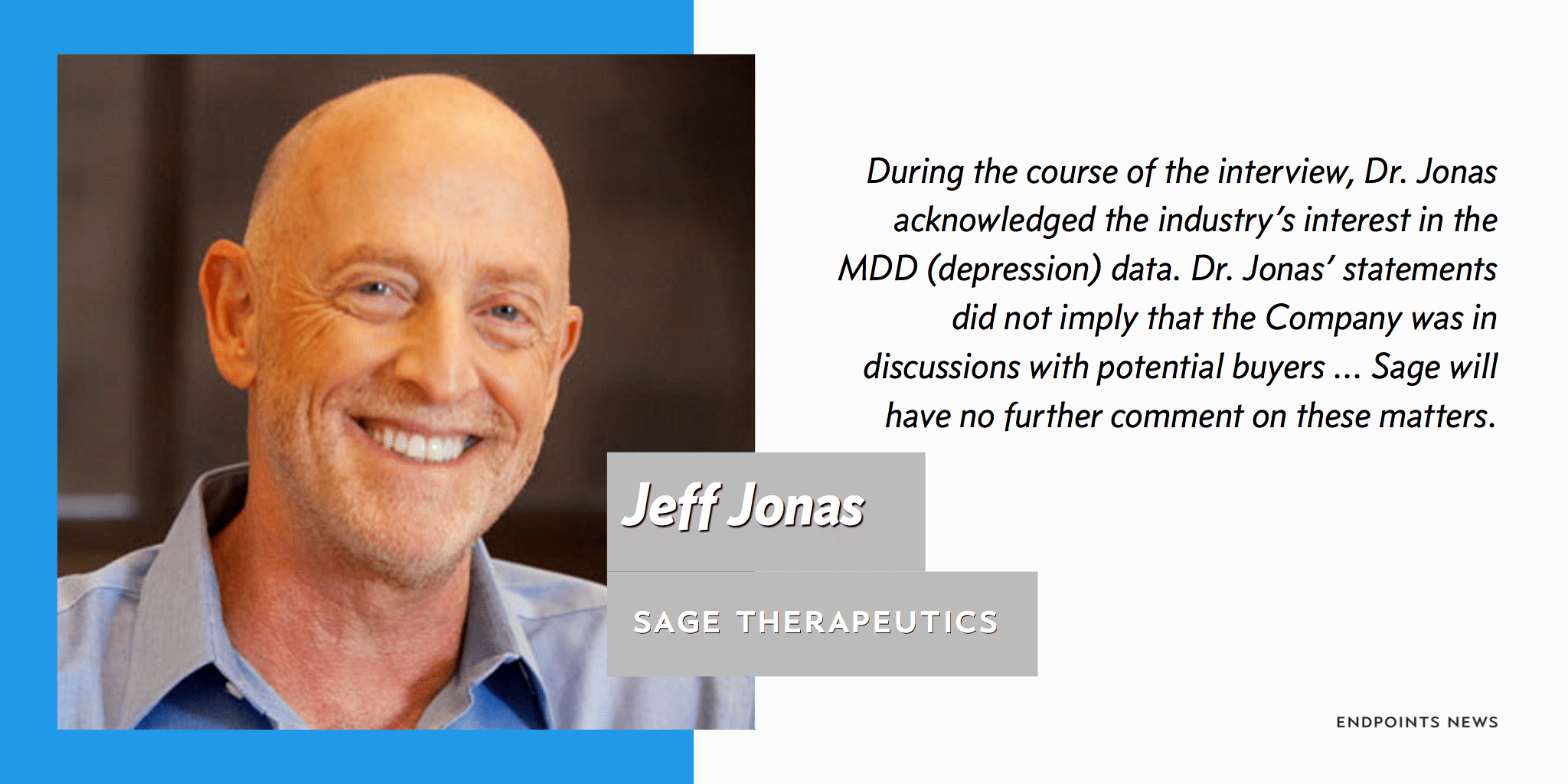 Few biotech CEOs like to hype da­ta from tiny stud­ies quite as much as an en­thu­si­as­tic Jeff Jonas at Sage $SAGE. But on Thurs­day, he pumped it a lit­tle too hard.

Doni Bloom­field from Bloomberg taped him for a seg­ment on the Bay State Biotech Re­port in which he talked about SAGE-217’s shot at be­com­ing a “first-line” ther­a­py for de­pres­sion.

Not on­ly did the drug cut scores on de­pres­sion among se­vere­ly de­pressed peo­ple by 20%, he said, “there’s a good like­li­hood it will help peo­ple sleep.”

This for a drug that just cleared an open la­bel tri­al for de­pres­sion with just 13 pa­tients in a dis­ease that af­flicts mil­lions of peo­ple. In de­pres­sion, de­vel­op­ers typ­i­cal­ly run three big Phase III stud­ies to see if they can come up with two that are pos­i­tive, fig­ur­ing that the place­bo ef­fect by it­self will take down at least one of them. So this drug has quite a ways to go be­fore any­one can start tout­ing ben­e­fits and count­ing rev­enue.

Then, as of­ten hap­pens with Bloomberg re­porters, Bloom­field asked about the po­ten­tial for deal-mak­ing. And that’s when Jonas stepped over a very vis­i­ble line for a CEO of a pub­lic com­pa­ny.

And, for good mea­sure, he added:

“We are hear­ing a great deal from a lot of com­pa­nies, es­pe­cial­ly since the de­pres­sion da­ta came out.”

Sound like buy­out talks? That’s what a lot of in­vestors heard, and they rushed to buy, pump­ing up the stock. But while an­a­lysts can say that a com­pa­ny is a prime takeover tar­get, pub­lic com­pa­ny CEOs have to be very care­ful what they com­mu­ni­cate to the mar­ket in an in­ter­view.

And, it turns out, the biotech had to wave off any talk of an ac­qui­si­tion. Here’s the com­pa­ny’s state­ment fol­low­ing up the in­ter­view:

Dur­ing the course of the in­ter­view, Dr. Jonas ac­knowl­edged the in­dus­try’s in­ter­est in the MDD (de­pres­sion) da­ta. Dr. Jonas’ state­ments did not im­ply that the Com­pa­ny was in dis­cus­sions with po­ten­tial buy­ers. Sage re­mains fo­cused on its core mis­sion of de­vel­op­ing nov­el med­i­cines in CNS dis­or­ders. Sage will have no fur­ther com­ment on these mat­ters and as a pol­i­cy does not com­ment on spec­u­la­tion re­gard­ing M&A ac­tiv­i­ties.

Sage is still ahead of the game, though. The com­pa­ny’s stock end­ed the day up 9% and is down 5% in pre-mar­ket trad­ing. 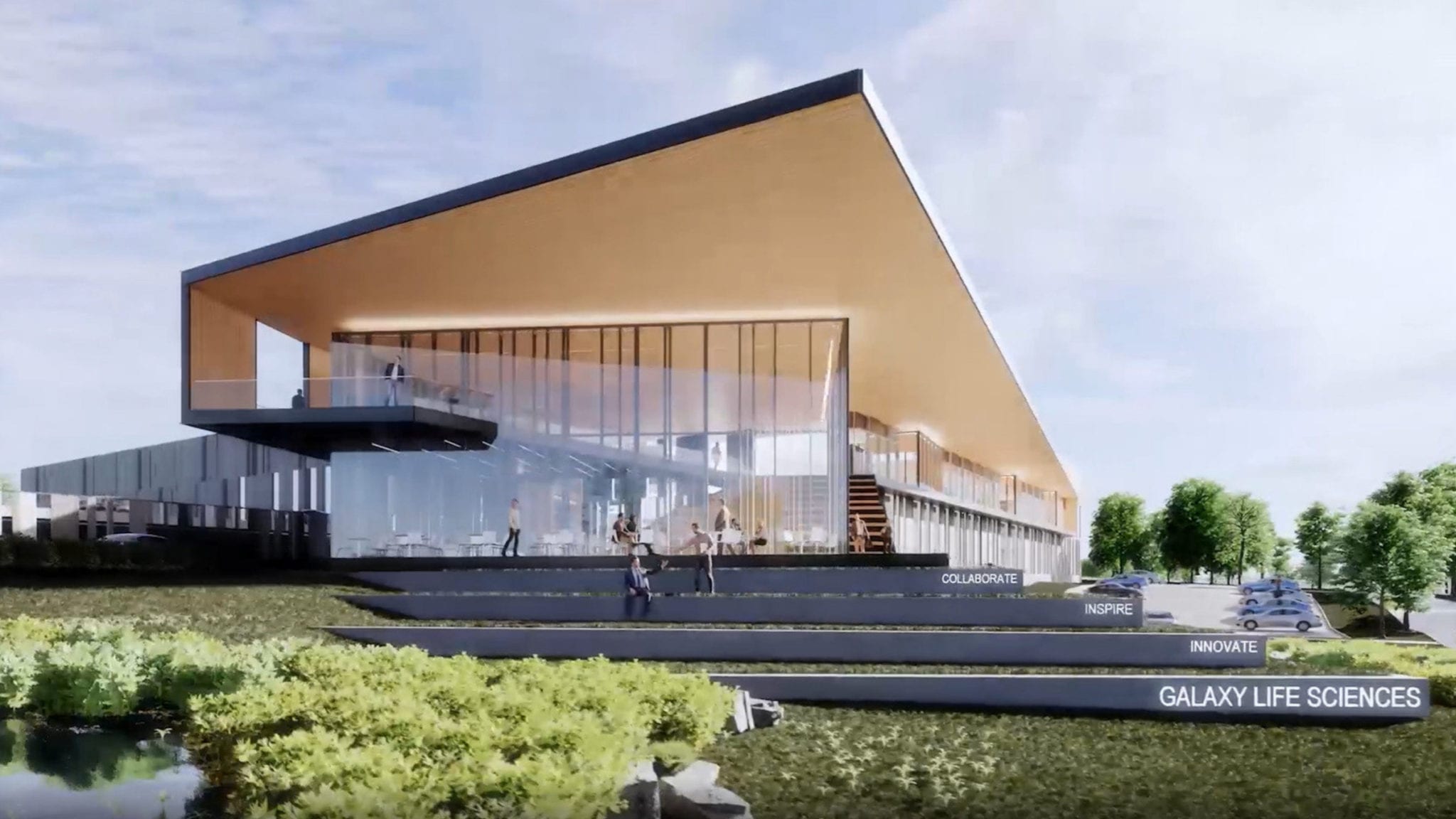 Galaxy paid $1.9 million for a 6-acre plot, on which it intends to construct a $50 million building grossing 95,000 to 180,000 square feet. The space will be designed to accommodate research and development, or manufacturing, and could employ 125 to 150 workers, according to the Worcester Telegram & Gazette. Construction is expected to begin this spring and wrap up in about a year.