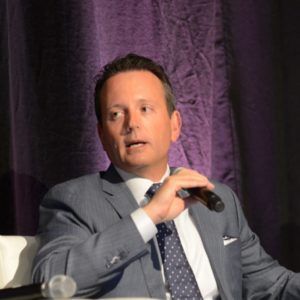 But this wasn’t just de­fend­ed by the at­tor­neys, who are paid to make ar­gu­ments of all kinds. Al­ler­gan CEO Brent Saun­ders took up the stan­dard and led the charge him­self. He hurt him­self at every turn, look­ing every bit like a Big Phar­ma ex­ec who would try any gim­mick to pro­tect the cash cow. This was in 2017, as the in­dus­try’s rep was tak­ing a turn for the worse — while the pub­lic and law­mak­ers be­gan to raise a clam­or over drug prices.

Al­ler­gan stuck to its le­gal guns, and the in­dus­try rep slid south right along with their ar­gu­ment.

“We can cer­tain­ly agree to dis­agree,” Saun­ders told me back when this got start­ed, adding adamant­ly that “every­thing we have done here is com­plete­ly con­sis­tent with our so­cial con­tract.”

You don’t hear much about the so­cial con­tract these days, which dates back to the com­pa­ny’s at­tempt to get top play­ers to show some re­straint on drug prices. Al­ler­gan raised many of its drug prices 9.9% at the be­gin­ning of the year, with­in the guide­lines of the so­cial con­tract, and all you hear from the pub­lic now is a de­mand to cut prices.

Aside from a few biotech al­lies who are no big­ger fans of IPR than Al­ler­gan, though, the biotech had few cham­pi­ons to help in the fight. Promi­nent law­mak­ers sin­gled them out to scorn­ful­ly ac­cuse them of try­ing to run a sham. Ac­tivists would add this to their list of trans­gres­sions by Saun­ders as the stock price de­clined.