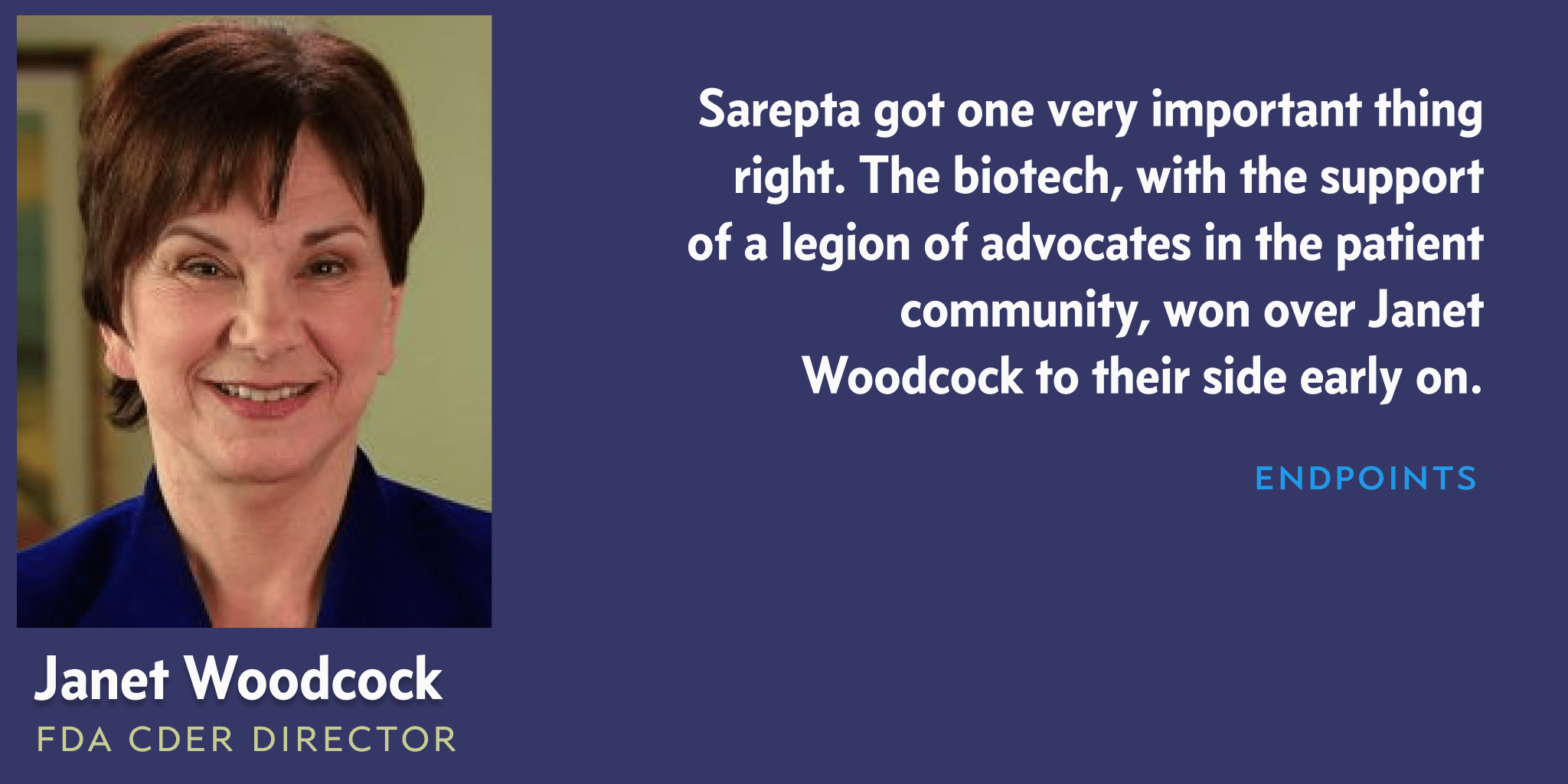 In the end, Sarep­ta did many things wrong when it came to de­vel­op­ing a new drug for Duchenne mus­cu­lar dy­s­tro­phy. But it got one very im­por­tant part right. The biotech, with the sup­port of a le­gion of ad­vo­cates in the pa­tient com­mu­ni­ty, won over Janet Wood­cock to their side ear­ly on.

Califf’s sum­ma­ry re­view of the ex­tra­or­di­nary show­down over eteplirsen point to prob­lems that would have eas­i­ly killed prac­ti­cal­ly any oth­er mar­ket­ing ap­pli­ca­tion. But with the cen­ter di­rec­tor tak­ing a pas­sion­ate stand in fa­vor of the drug, the com­mis­sion­er says he de­cid­ed that he would de­fer to Wood­cock in view of his lack of tech­ni­cal ex­per­tise in the mat­ter and a suf­fi­cient record of ev­i­dence to war­rant its move in­to the mar­ket.

Both Unger and Bo­rio op­posed Wood­cock’s de­ci­sion to grant an ac­cel­er­at­ed ap­proval for eteplirsen, ac­cord­ing to the Sep­tem­ber 16 memo from Califf as well as their own mem­os. Califf set out to de­ter­mine if the FDA was sig­nif­i­cant­ly low­er­ing the bar for an ap­proval, but ul­ti­mate­ly de­cid­ed that Wood­cock was pur­su­ing a well es­tab­lished track record for be­ing will­ing to take tough, eth­i­cal stands in­side the agency, rather than buck­ling to a lob­by­ing cam­paign.

Unger, who warned that the safe­ty pro­file of eteplirsen is not yet known and that pa­tients tak­ing the drug could die from treat­ment, was scathing in his as­sess­ment of the ther­a­py.

She opined that Sarep­ta in par­tic­u­lar “need­ed to be cap­i­tal­ized.” She not­ed that the spon­sor’s stock went down af­ter the AC meet­ing and went up af­ter FDA sent the June 3, 2016 let­ter. Dr. Wood­cock cau­tioned that, if Sarep­ta did not re­ceive ac­cel­er­at­ed ap­proval for eteplirsen, it would have in­suf­fi­cient fund­ing to con­tin­ue to study eteplirsen and the oth­er sim­i­lar drugs in its pipeline. She stat­ed that, with­out an ap­proval in cas­es such as eteplirsen, pa­tients would aban­don all hope of ap­proval for these types of prod­ucts and would “lapse in­to a po­si­tion of” self-treat­ment.

I would be re­miss if I did not note that the spon­sor has ex­hib­it­ed se­ri­ous ir­re­spon­si­bil­i­ty by play­ing a role in pub­lish­ing and pro­mot­ing se­lec­tive da­ta dur­ing the de­vel­op­ment of this prod­uct. Not on­ly was there a mis­lead­ing pub­lished ar­ti­cle with re­spect to the re­sults of Study 201/202147 –which has nev­er been re­tract­ed—but Sarep­ta al­so is­sued a press re­lease re­ly­ing on the mis­lead­ing ar­ti­cle and its find­ings.

There is a dis­tinct pos­si­bil­i­ty, the FDA feels, that in­creas­ing the dose would pro­vide enough dy­s­trophin ex­pres­sion, the key bio­mark­er for this dis­ease, to make it work as hoped. But it’s on­ly been test­ed in an­i­mals, nev­er in hu­mans — at least not yet.

And if Sarep­ta had done what the FDA was telling the com­pa­ny to do, says Califf, then they would prob­a­bly al­ready have enough com­pelling da­ta in hand to make a de­ci­sion based on the mer­its of the drug.