The analy­sis echoes the find­ings of an As­so­ci­at­ed Press in­ves­ti­ga­tion — pub­lished this Sep­tem­ber — which in­di­cat­ed that al­though there were 96 price hikes for every price cut, the num­ber and size of hikes de­creased in the first sev­en months of 2018.

The most price-de­pen­dent growth com­pa­nies be­tween 2013 and 2017 were: Am­gen, As­traZeneca, GSK, and Pfiz­er; and the least price-de­pen­dent were: Alex­ion, JNJ, and Re­gen­eron. Over­all, the num­ber of price in­creas­es slowed this year by 31%, and the av­er­age size of the price in­creas­es fell by 40% — both mea­sures falling to their low­est lev­el in five years, the re­port found.

Sig­nif­i­cant­ly, “the de­cline in the net pos­i­tive price con­tri­bu­tion to in­dus­try growth has more or less matched the de­cline in rev­enue growth over the same pe­ri­od of time,” Porges not­ed. 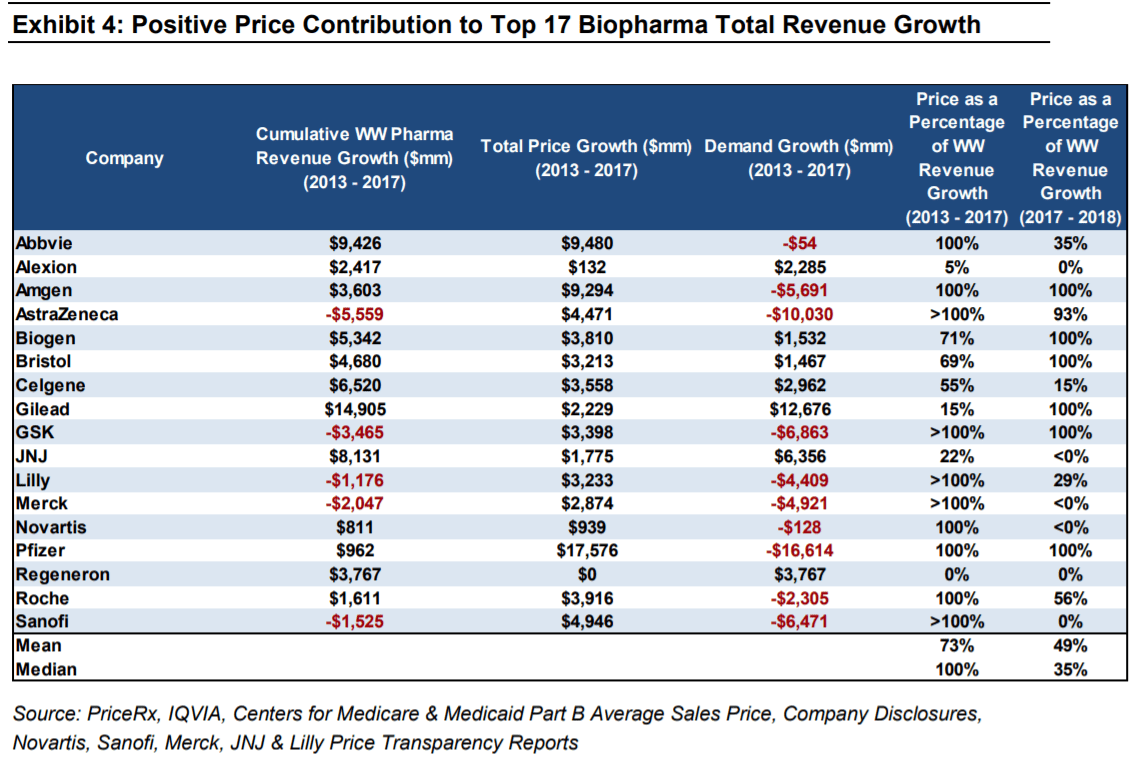 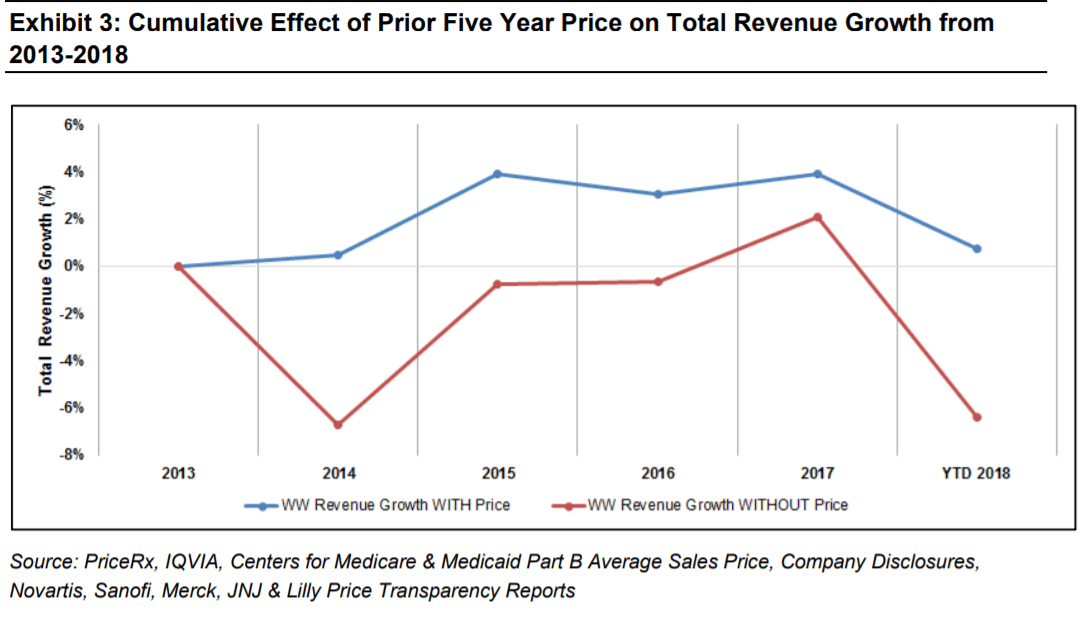 Fol­low­ing the re­lease of Pres­i­dent Trump’s blue­print for low­er­ing drug prices in May, a pletho­ra of com­pa­nies pledged not to in­tro­duce their usu­al hikes in the mid­dle of the year — how­ev­er, whether this re­straint will con­tin­ue in the fu­ture re­mains to be seen. Since then the HHS has float­ed two pro­pos­als to thwart soar­ing prices for Medicare and its ben­e­fi­cia­ries.

Mean­while, Mer­ck raised the price of some of its ma­jor drugs in No­vem­ber, and Pfiz­er has an­nounced it will in­crease the price of 41 drugs next month. 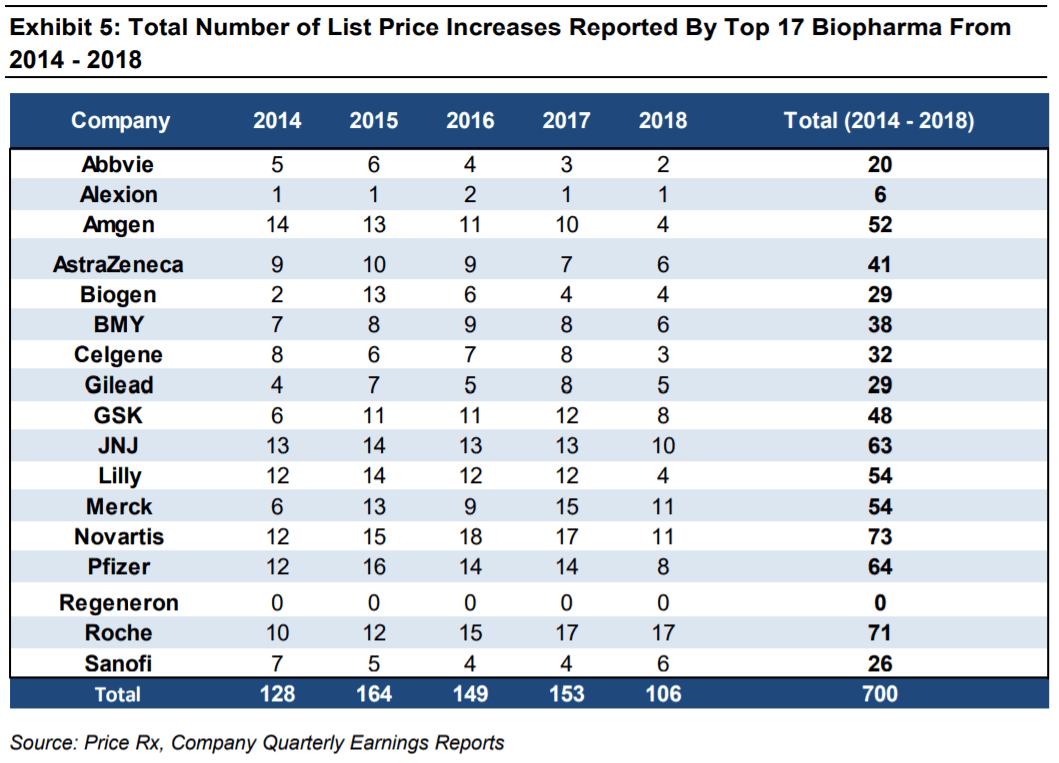 “These com­pa­nies are like­ly to be fol­lowed by a flood of peers, and then by in­evitable re­spons­es and re­ac­tions from Wash­ing­ton. How this col­li­sion of in­ter­ests plays out is any­one’s guess, and the ad­min­is­tra­tion’s cre­ativ­i­ty and in­ven­tive­ness with re­spect to pric­ing pro­pos­als seem un­like­ly to be di­min­ished in 2019. Iron­i­cal­ly, the sub­ject of drug pric­ing is prob­a­bly one of the few gen­uine­ly bi­par­ti­san is­sues for both ma­jor par­ties, and fur­ther reg­u­la­tion or re­stric­tions on drug pric­ing and price in­creas­es seem like­ly in our view to set up a show­down be­tween Pres­i­dent Trump, Con­gress and the Bio­phar­ma in­dus­try rel­a­tive­ly ear­ly in the New Year,” con­clud­ed Porges.