Gilead’s world­wide hep C mar­ket may be shriv­el­ing at a fast pace, but the com­pa­ny con­tin­ues to field new com­bos that are wip­ing out re­main­ing pock­ets of dis­ease.

To­day came news that Gilead’s three-drug com­bi­na­tion of so­fos­bu­vir, vel­patasvir and a new drug called vox­i­lapre­vir has been ap­proved for the hep C phar­ma­copeia. It will now be sold as Vo­se­vi.

“Di­rect-act­ing an­tivi­ral drugs pre­vent the virus from mul­ti­ply­ing and of­ten cure HCV. Vo­se­vi pro­vides a treat­ment op­tion for some pa­tients who were not suc­cess­ful­ly treat­ed with oth­er HCV drugs in the past,” said Ed­ward Cox, di­rec­tor of the Of­fice of An­timi­cro­bial Prod­ucts in the FDA’s Cen­ter for Drug Eval­u­a­tion and Re­search.

Eval­u­atePhar­ma pegged the triple as a top-5 R&D prod­uct in the pipeline last May, an­tic­i­pat­ing glob­al sales of $1.14 bil­lion in 5 years. Hep C mar­kets have be­gun to shrink this year as a new wave of cock­tails prove ef­fec­tive in cur­ing the dis­ease as it is be­ing di­ag­nosed. Gilead rev­o­lu­tion­ized this mar­ket and re­mains ag­gres­sive about launch­ing new prod­ucts that can com­plete the task.

Nor­bert Bischof­berg­er, the head of R&D at Gilead, had this to say about the triple when it was sub­mit­ted to the FDA late last year:

The re­main­ing clin­i­cal need to treat HCV pa­tients is a safe and ef­fec­tive cure for pa­tients who have failed pre­vi­ous ther­a­py with DAA reg­i­mens, in­clud­ing those with NS5A in­hibitors. SOF/VEL/VOX has the po­ten­tial to fill that need by of­fer­ing sin­gle tablet dos­ing and high cure rates across all HCV geno­types for pa­tients with and with­out cir­rho­sis, who have failed pri­or treat­ment with oth­er high­ly ef­fec­tive reg­i­mens.

There’s no im­me­di­ate word on pric­ing.

To put this all in­to per­spec­tive, you can see be­low Eval­u­atePhar­ma’s re­cent list of the top 10 an­ti-vi­ral com­pa­nies in the world. With hep C shrink­ing, Gilead is ex­pect­ed to lose big over the next 5 years. But it will re­main the dom­i­nant gi­ant in the field. GSK is catch­ing up with its HIV drugs, though, and this re­mains a high­ly com­pet­i­tive field. The top 5 prod­ucts on the mar­ket and in the pipeline are out­lined be­low. 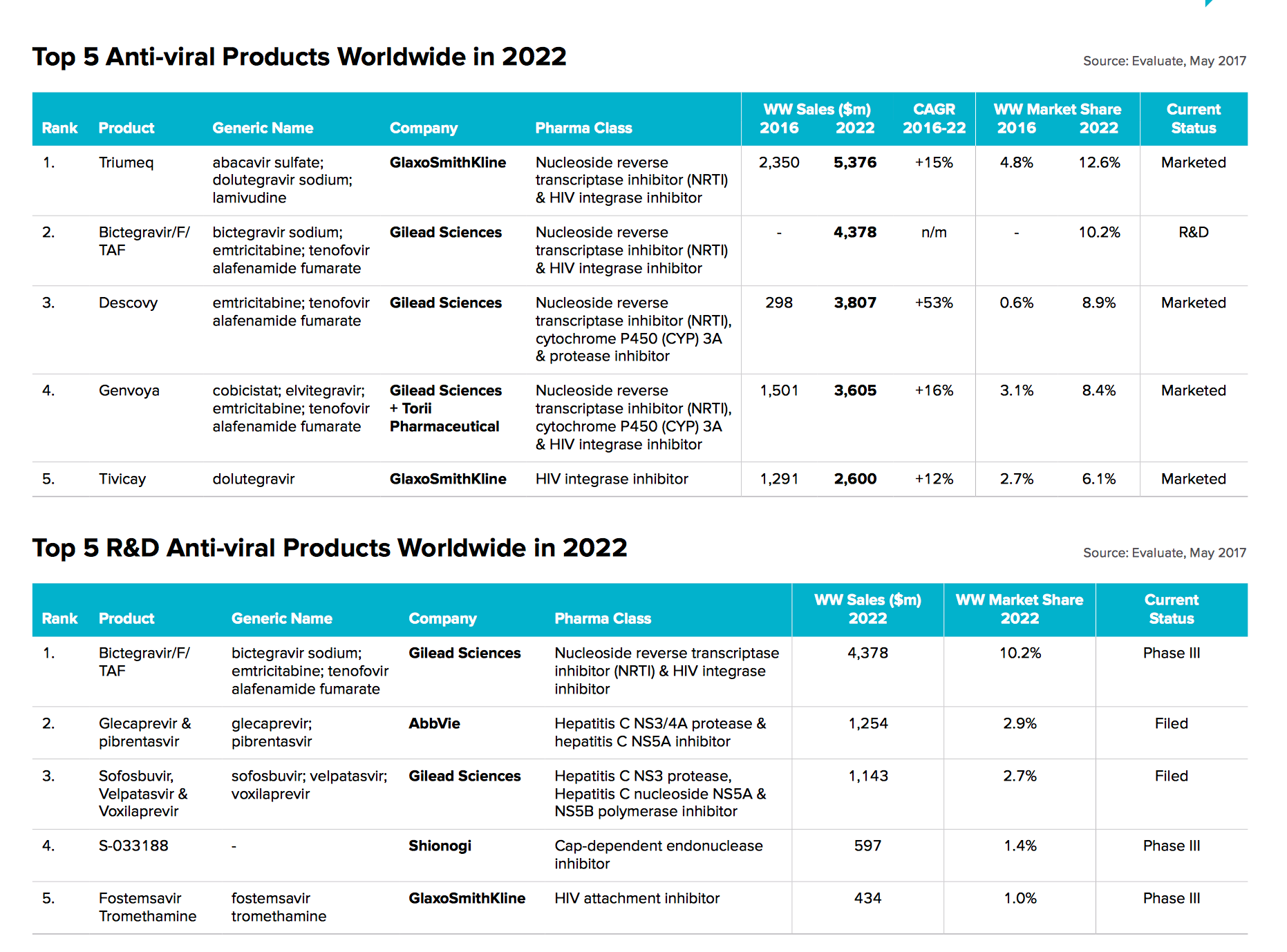