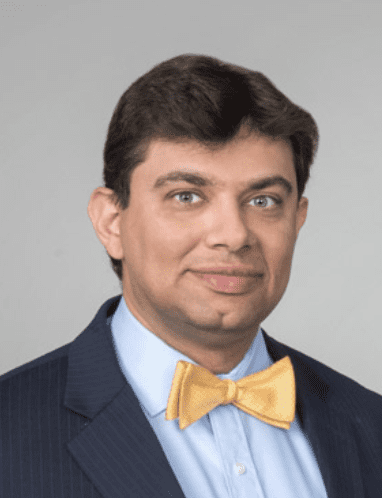 GSK’s Hal Bar­ron in­her­it­ed a part­ner­ship with Anap­tys­Bio when he bought out Tesaro and gained the PARP drug Ze­ju­la a cou­ple of years ago for $5 bil­lion. And he’s will­ing to pay for the right to try var­i­ous check­point com­bi­na­tion drugs with Ze­ju­la now that the PD-1 he al­so got in the deal is teed up for a like­ly near-term ap­proval.

For one, Suria’s com­pa­ny filed a law­suit against GSK say­ing they had vi­o­lat­ed the old Tesaro deal when they start­ed a PD-1 com­bo study for Ze­ju­la us­ing Mer­ck’s PD-1 king Keytru­da for non-small cell lung can­cer. Their deal, the biotech al­leged, was sup­posed to be ex­clu­sive. That law­suit, sched­uled to head to tri­al next spring, called for GSK to hand back the drug, dubbed dostar­limab. And in Au­gust they gave GSK 60 days to cure the breach.

The way the deal was orig­i­nal­ly struc­tured, Anap­tys­Bio would get a 4%-to-8% slice of the rev­enue on dostar­limab. That 8% was due on sales over $1 bil­lion a year.

Now, GSK is will­ing to pay sig­nif­i­cant­ly more in roy­al­ties.

There’s still a lit­tle more than a bil­lion dol­lars in mile­stones in the deal, and Suria be­lieves he’s go­ing to pick up $75 mil­lion in the next 18 months for FDA and EMA ap­provals of dostar­limab as Bar­ron hunts US ap­proval be­fore the end of the year for en­dome­tri­al can­cer. Not so well known is Bar­ron’s plans to file for us­ing the PD-1 to treat mis­match re­pair de­fi­cient can­cers on a pan-tu­mor ba­sis in H1 2021.

GSK has had a tough time con­vinc­ing an­a­lysts that the run­ner-up PARP be­hind As­traZeneca and the num­ber 7 PD-(L)1 be­hind a slew of ri­vals have big fu­tures.

But he seems ab­solute­ly de­ter­mined to prove them wrong. And he’s will­ing to pay for the priv­i­lege.

On­col­o­gy loomed large when Bar­ron was brought in to head up GSK’s top-15 R&D group. The phar­ma gi­ant needs to score some sig­nif­i­cant suc­cess­es in can­cer R&D, fol­low­ing the ap­proval of be­lan­tam­ab mafodotin a few months ago, and they shouldn’t have long to wait now.